Overhead is always a fascinating topic in our business management workshops because everyone has a different definition of what overhead truly is. And those different definitions can lead to confusion or, worse, indifference. Most landscape contractors have nothing but hope that their overhead is being recovered. This is absolutely true. Many I’ve met over the years are pretty open about the fact that they don’t know whether or not their job prices are recovering their overhead, or even what their overhead spending actually is. It’s no wonder Charles Vander Kooi calls it “the bill in the night.” It sneaks up and bites them when it’s too late — when it’s time to pay themselves.

There are two reasons overhead sneaks up on so many contractors. First, it’s not a cost you can specifically calculate for any one job. Second, there are so many different definitions of overhead and so few accountants who explain and set up overhead in a way that’s useful to their clients.

If you took 10 different landscape contractors, put them in a room and compared their books, it’s easy to see why overhead gets overlooked.
Overhead is called different things by different people and different accounting packages. Other names that mean the same thing include general and/or administrative expenses, indirect expenses, operating expenses and fixed expenses.

You’ll also find that different accountants have different ideas of what should be included in overhead. Some lump all payroll under overhead. Others, more correctly, split payroll into two types: field payroll and office/overhead wages. Some count equipment as overhead, some don’t. Equipment rental, subcontractors, fuel and workers’ compensation insurance are other examples. I’ve seen all these in different sections, depending on whose books you’re looking at. Industry benchmarks for overhead are great — but they’re only good if your definition of overhead and the benchmark definition of overhead are the same. Unfortunately, for most companies, they aren’t.

So what’s correct?  What is really overhead and what isn’t?  What is “the standard”?

If defining overhead was as simple as determining a standard, we wouldn’t have to call overhead the “bill in the night.” It would all be much clearer. However, there’s a very good reason why overhead is different from company to company and it all comes down to how you estimate.

Why is overhead different? Let’s use the widget example. Acme Widget Co. produces widgets. To do so, it assembles three different parts: Part A, which costs $10; Part B, which costs $20; and Part C, which costs $30. Each widget therefore costs Acme $60 in direct costs: the raw costs of the materials necessary to produce the widget. 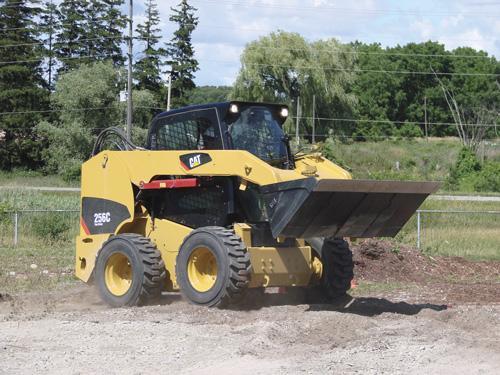 Allocating equipment costs is a grey area. The cost of equipment used on the jobsite should be built into your estimates, however sales vehicles, owner's truck and yard equipment must be categorized as overhead.
But Acme needs money to power the factory, to pay the owners, to advertise, to pay the insurance, etc. If Acme’s indirect or overhead costs are $5,000 month, and the factory builds 1,000 widgets a month, you can easily figure that Acme needs to add $5 per widget (that’s $5,000 of overhead divided by 1,000 widgets) to pay the overhead or indirect costs. Acme now knows it needs to sell each widget for at least $65 just to break even: $60 to cover the costs of producing the widget and $5 per unit to cover overhead costs. In order to make a profit, Acme will have to sell it’s widgets for more than $65.

Simple stuff. But what about a landscape company that doesn’t sell widgets?  We sell labour (our crews), equipment, materials, subcontractors, and it’s a lot more complicated than the Acme Widget example. That said, understanding your overhead isn’t so hard that you should leave it to chance.

The costs you estimate on your jobs are like Acme Widgets’ parts A, B and C. You recover those costs directly in the price of the job. All other costs have to be included in your overhead — they aren’t calculated into the estimate, but they absolutely must be considered in your selling price. Because companies differ in what they include in their estimates, overhead can vary from company to company. Some companies build the costs of equipment into their estimates, while others consider equipment costs as overhead. This is the reason there’s not one clear standard for overhead.

Following is a summary of what is generally considered overhead:
Labour:  A company’s labour costs are mixed between direct and indirect overhead. When you’re estimating the hours and costs of labour on a job, you are calculating your crews’ costs as a direct (not overhead) cost. The cost of your field crews’ wages are factored into your estimates, in the cost of the job. Payroll costs for crews should not be considered overhead. On the other hand, costs for office or shop staff such as your office manager, bookkeeper, mechanic or owner’s salary aren’t calculated in your estimate. These payroll costs need to be considered overhead.

Note: Not every hour of your crews’ time is factored into an estimate. There are many hours we pay our staff when they aren’t physically on a job. Instead of splitting paycheques between direct and overhead costs, I believe it’s easier to add a mark-up to their wages when you calculate their costs, typically between 15 and 30 per cent, to cover unbilled time.

Equipment: There’s lots of debate here. Some argue that equipment should be an overhead cost because many equipment costs, such as lease payments, are fixed, whether or not the equipment actually works. While that’s a valid point, I think the counter argument is stronger. If you count your equipment as overhead, you get an average cost to apply across your jobs. If equipment is overhead, then every job pays an average cost for equipment, whether it needs a lot of equipment or no equipment.

It’s easy to see why this average doesn’t work in real life. Imagine a snow operation with a $100,000 loader and pusher as an overhead cost. All jobs then end up sharing a portion of that equipment’s cost as part of the overhead mark-up. The billable rate for a man and a shovel would be identical to the billable rate for a man operating the loader, since equipment costs aren’t calculated directly for a job. That kind of pricing is going to put you out of business in a hurry. By averaging costs, the rates for the man and a shovel will be far too expensive, while rates for the loader operator won’t be enough to cover the real costs of the loader.

Instead, you should calculate the cost and a rate per hour or per day for your equipment, and build these costs and prices into your estimates.

Note: There’s a good chance some of your equipment is overhead. Equipment that doesn’t get billed to jobs (owner’s truck, sales vehicles, yard equipment) doesn’t get itemized as a cost on an estimate and therefore needs to be categorized as overhead.

Materials: Almost all your materials will be direct costs, i.e., costs you estimate to your jobs. However, you should have a consumable materials account in your overhead to recover materials costs that are too small to be estimated directly to jobs (garbage bags, string line, saw blades, etc.). You may also need an overhead account to cover material purchases made for shop and yard Improvements, since these costs are not charged on any estimate to a customer.

Almost every other cost is part of your overhead. Advertising, insurance, accounting, rent, heat, hydro — none is priced directly into your estimates and therefore they are overhead.

How important are these details?  If you don’t know your overhead, you can’t possibly know if you’re making or losing money on a job. Most contractors make money on some jobs, lose money on others and hope it all comes out in the wash at the end of the year. But, in a competitive market, you stand a good chance of winning the jobs you’ve underpriced and losing the jobs you’ve overpriced!  Guessing at your overhead doesn’t “come out in the wash.” You are far more likely to come up short, winning more of the jobs that aren’t making you any money and perhaps missing out on the ones where your pricing could have been more competitive.

Now, in prime season for sales, the success of your business depends on knowing your overhead and using an accurate estimating system. There’s absolutely no good reason to put it off any longer.