Poor communication is one of the biggest causes of failure, says Lacombe, Alta., certified mediator and business advisor, Reg Shandro. According to Shandro, few of us actually know what good communication looks like.  “We get very little education on how to be a good communicator,” he explains.

Shandro helps small business clients improve their communication practices. Most of us would benefit from improving our listening skills, he says. “There’s a big difference between listening and hearing,” he explains. “Most of us don’t take the time to really listen and understand. Make sure you don’t interrupt and don’t assume you know what the other person is going to say.”

Shandro says people are so busy they can fall into the trap of working on the day-to-day aspects of the operations, but not the long-term goals of the business. “Perspectives aren’t shared, assumptions are made, and the business runs into trouble,” he says.

Assumptions are a big problem, agrees Winnipeg business coach Pam Paquet. Often the founder knows what he or she wants, but fails to communicate it to others. Other times the communication is top-down only. “Communication needs to be a two-way street,” she explains.

While experts often promote the importance of self-awareness, Wendy Sage-Hayward, a family enterprise adviser with the Family Business Consulting Group and a professor at the University of British Columbia’s Sauder School of Business in Vancouver, says self-management is even more important. The ability to manage one’s behaviour, to remain rational and calm, is essential for good communication, she says. And everyone involved must have the opportunity to express their opinions.

We tend to think that conflict is the problem but that isn’t really the case, says Shandro. “Conflict is a natural part of any relationship,” he says. “It doesn’t have to be negative; it depends on how you approach it,” he says.

Sometimes it may be necessary to get an objective third party like a mediator to help identify and change bad habits. “You don’t know what you don’t know,” says Shandro, who likes to quote Albert Einstein’s observation, “We can’t solve problems by using the same kind of thinking we used when we created them.”

Sometimes succession stalls because the business owner has trouble letting go. If the owner hasn’t taken the time to create a retirement plan, he may have a harder time pulling back from the business. She has this advice for business owners: “Think about what you’d like to do. Do you want to work part-time or leave completely? Do you want to resurrect an old hobby, volunteer or travel? What will your next adventure be?”

She understands this is a big shift for someone who has worked hard to build up a company. “Their identity may be completely wrapped up in the business.” But until they figure it out, the succession plan will be stuck. If the next generation wants to take over but the owner is reluctant, there will be conflict, she says.

It may help the owner to think of the transition as an exit strategy, rather than retirement. Retirement can have negative connotations for people, says Paquet. Instead she says business owners should focus on what the next phase of their life is going to look like.

Gordon Colledge, a business advisor in Lethbridge, Alta., advises people to take a couple of months thinking about what they want to do. Colledge thinks too many people don’t take the time to really think about what they want retirement to look like. “It’s important to dream, to let the ideas flow to the top. Visioning creates a montage of facts, hopes, dreams, dangers and opportunities.” Make sure your spouse is part of this process too, continues Colledge. “After you let your imagination run free then you can figure out what it will cost, and make a plan.”

The owner’s vision and exit strategy will fuel the succession plan, says Paquet. She advises starting three years in advance, and identifying measures of success for each stage. What are the steps involved at six, 12 and 18 months? Which gaps need to be filled? How will you fill them? By hiring someone with the appropriate skills, or training someone already employed through mentoring?

It’s important to make sure everyone is clear on his roles and how the process will take place, to ensure there are no hurt feelings, says Sage-Hayward. Then the appropriate structures and agreements need to be put in place to ensure everything goes according to the plan, she adds.

One way to ensure that everyone is clear on what’s happening and when, is to write it all down on a roll of newsprint and hang it on the boardroom wall, says Paquet. This will create a visual reminder to help keep the process on track.

Geoff Pratt (left) and Richard Rogers
Richard Rogers of RJ Rogers Landscaping in Manotick, Ont., recently sold his residential landscape construction company to a long-time employee, Geoff Pratt. Rogers started the company 25 years ago and built it up to a highly-respected firm with eight employees. For some years it had been understood that Pratt would take over the company someday, says Rogers.

About two years ago Pratt decided he was ready. The transition has now been completed successfully with Pratt is the new owner, but there were a few bumps along the way. Initially Rogers and Pratt started by meeting for breakfast to discuss the sale, which worked well. But at some point they began negotiating by email. “That wasn’t good,” says Rogers. “It created tension. It needed to be face-to-face.”

Rogers says he was fortunate to have Hank Gelderman, former owner of Gelderman Landscaping, Waterdown, Ont., serve as a mentor during the transition.

Gelderman had been through the process himself and had some excellent advice, says Rogers. Gelderman advised Rogers to work out a deal before they consulted lawyers, and to write the deal down on a single page, using simple language. Then he recommended each party to have its own lawyer draw up an agreement, using language that was understandable.

During the two-year transition period, Rogers reviewed financial statements with Pratt to help him gain a better understanding of the financial side of the business. The company also hired an estimator to take over Rogers’ duties.

It’s been an adjustment, admits Rogers, who says he wasn’t tired of the business yet. Rogers went down to part-time hours as a salaried employee to help with the transition. He is getting involved in new interests, and has rediscovered a love of kayaking, which he now has time to do. “I needed to be able to let go, and I also needed to make sure I was okay with my financial situation,” he says.

When everything was completed, Rogers sent an email to the company’s clients to let them know that Pratt was the new owner. “It felt strange at first not to put my name down as a contact,” he says. 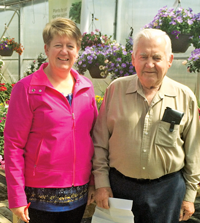 Anita Heuver, Eagle Lake Nurseries, with her father Tony, who is still involved in the day-to-day business, while the transfer of management gradually takes place.
Timing is everything and sometimes the next generation wants to take over before the senior generation is ready to let go. Anita Heuver is in the process of taking over Eagle Lake Nurseries, near Strathmore, Alta., from her father Tony. She says her dad wasn’t ready to step back when her brother Eric wanted ownership twenty years ago. So the Heuvers got creative and Eric took over the sod division, establishing Eagle Lake Turf Farms in 1998.

If there are issues, you have to do something about it, says Anita. “Don’t let it ride or it can ruin the family, the business, or both,” she says.
Today, at age 80, Tony is still involved in day-to-day nursery operations. Anita is working on ways to ensure she is able to fill her father’s role when he is no longer involved. “Much of what dad knows is in his head, and not on paper,” she explains. “I’m trying to get the younger staff to learn what he knows.”

The advisors and the entrepreneurs agree; listening, respect and crafting a mutually beneficial plan can certainly help
prevent hurt feelings. And those steps can actually help assure the success of a company’s ownership transition.

Helen Lammers-Helps has a degree in agriculture from the University of Guelph. She has been writing about agriculture and horticulture for more than 10 years.