Plant Atlantic is the plant breeding and selection program developed at the Memorial University of Newfoundland Botanical Garden (MUNBG). Started in 2004, this program mirrors a similar successful program developed at the University of British Colombia (UBC) Botanical Garden. This is not surprising since the director of MUNBG in 2004, Dr. Wilf Nichols, used to be one of the plant breeders at UBC. His main claim-to-fame during his years at UBC was the development of ‘Mandarin’ honeysuckle. When Dr. Nichols moved to Newfoundland as director of MUNBG, he brought a mock orange hybrid (Philadelphus) he had developed at UBC. This mock orange was to become the starting point for our Plant Atlantic program. Through an Atlantic Innovation Fund (AIF) grant, I was hired as the research horticulturist for this project, and I have been carrying out plant breeding and selecting ever since.

Plant Atlantic utilizes both active breeding for new plants as well as selections of unique native plants that have horticultural merit. These plants include both herbaceous and woody material. The goal is to patent these plants, set up license agreements with propagators across Canada and beyond, with royalties returning to MUNBG to continue the breeding program.

International market break-out
The mock orange was the first release from Plant Atlantic to enter the national and international market. It was created by crossing the very hardy Philadelphus lewisii to the more tender P. delayavi var. melanocalyx. The latter species has a deep purple calyx which contrasts with the snowy-white flowers. The hybrid selected from the cross had the prairie hardiness of P. lewisii but the wonderful purple calyx of P. delavayi. The selection was named ‘Starbright’ and received a U.S. Plant Patent in 2008 and European CVPO in 2013. ‘Starbright’ has been a hit with propagators and growers in Europe, and through the help of Plants for Europe is now being propagated across Europe for mass release in 2014. It helps that the U.K. magazine WHICH? gave ‘Starbright’ a five-star rating in 2013!

There are two coniferous selections which have caught the attention of other plant propagators, namely a Picea and a Larix. The Picea glauca ‘The Limey’, is a white spruce that arose as a spontaneous seedling. The new foliage is brilliant yellow, becoming more chartreuse as the season progresses. In winter, the plant returns to its vibrant golden hue. This selection is now being propagated and sold through Iseli Nursery in Oregon. The eastern larch, Larix laricina, is a prostrate selection with blue-tinted foliage. It may be grown on its own roots as a creeping plant or top-grafted as a weeping standard. It is being trialed at Mosterman Plants in Chilliwack, B.C.

Proudfoot legacy
Two plants from our program came to us from an avid Friend of the Garden member, Ken Proudfoot. Ken, who is now deceased, was a potato breeder at Agriculture Canada’s Atlantic Cool Crop Research Centre in St. John’s. Besides breeding potatoes, Ken also dabbled in breeding other plants. Ken developed a Potentilla fruticosa hybrid he called ‘Helene’, after his late wife. This potentilla has light lemon-yellow flowers and interesting golden-stems. This selection is currently only being sold locally through Newfoundland nurseries. Ken also introduced to us a beautiful selection of Juniperus communis that has bright green spring growth, copper-purple winter foliage and a high proportion of twisted needles that expose their blue-white undersides. The overall effect is quite stunning, and both are real show stoppers in the garden.

Among the herbaceous plants from our breeding program, has been a number of intersection iris crosses between Iris versicolor, I. hookeri, I. siberica and I. ensata. Three have been recently registered with the American Iris Society under the names of ‘Bristol’s Hope’, ‘Plum Point’ and ‘Belle Royale’. These selections have the look of I. siberica with the branching flowering habit of I. versicolor.

As an added bonus, the spring foliage is brilliant yellow! Our native Newfoundland beach-head iris, Iris hookeri (aka Iris setosa var. canadensis) is already a popular perennial offered across Canada as Arctic iris. It is a dwarf plant, under 30 cm, with porcelain-blue flowers. Through additional select breeding, we now have a lavender-pink selection. Crosses of this selection to white Iris setosa has resulted in semi-dwarf plants with pale lavender to blue-violet flowers. However, these hybrids produce up to 18 sequential flowers, resulting in a blooming season of three weeks, a rare phenomenon for irises!

Most gardeners are familiar with marsh marigold, Caltha palustris. In most of the plant’s native range, the flowers have five yellow petals. However, in the Himalayas a white-flowered selection can be found in the wild. In the Plant Atlantic program we have bred and selected a Himalayan form that has flowers which are 50 per cent larger than the norm, with up to nine petals per flower and with the added bonus of buds that are pink before they open.

An Atlantic orchid
Recently, there has been a surge in the cultivation of hardy terrestrial orchids, yes orchids, in the garden! These exotic plants can fetch high prices as the supply cannot meet current demands. Plant Atlantic is fortunate to have a hardy orchid in our repertoire of new plants. Our plant is called Dactylorhiza ‘Inkspots’. This orchid produces a dense spike of magenta-pink flowers with darker markings. However, just as spectacular are the heavily spotted leaves which are a show-stopper. Unfortunately, this orchid needs evenly moist soil and will go dormant by late summer. Despite this drawback, gardeners who understand the habits of orchids will want this easy and relatively hardy plant for their collections. This orchid is currently being mass-produced at Murray’s Horticultural, Landscape and Garden Centre in Portugal Cove, Nfld. 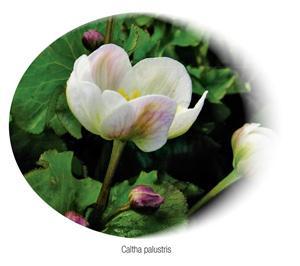 The most recent plant that has garnered great interest from landscape designers, growers and landscapers, is a semi-dwarf silver-leaved willow selected from our native Salix candida. This selection is a male, producing five-cm catkins in spring just as the leaves begin to unfurl. The stamens are red, opening to yellow, contrasting with the otherwise silver-white catkins. The summer leaves are silver-white above and felted-white below, a great contrasting plant in any landscape. Plants can ultimately reach two m, but through careful pruning, can be maintained at one m, and makes an admirable informal hedge or stand-alone specimen. This willow is currently being trialed at Mosterman Plants as well as Jeffries Nurseries, Portage la Prairie, Man.

So what else do we have in the pipeline? How about a Ligularia ‘The Rocket’ look-alike that is only 60 cm? Such a plant has arisen in a flat of mixed Ligularia hybrids we have grown. This past summer was its first-time blooming and this plant has us, and many others, quite excited. If it continues to stay this small, we could have a real winner. And then there is our semi-dwarf mountain ash (Sorbus) whose unripe fruits are dark burgundy, ripening to pale pink! This is quite a departure from our standard orange-fruited mountain ash. Another semi-dwarf mountain ash look-alike is our X Sorbaronia (Sorbus X Aronia), whose pale pink flowers develop into large, wine-red berries.