Use a perennial palette to enrich public spaces with textures, colours and seasonal interest

Commercial landscaping, whether in parking lots or office building beds, for churches or hospitals, for restaurants or college campuses, is seen by thousands of people every day. Most might be considered boring rather than inspiring or exciting, but if we use an expanded plant palette, we can constructively influence the public’s perception of landscaping.

What attributes are we looking for? We want high performance and low maintenance; long bloom, more than one season of interest, little deadheading and no staking. Many perennials and ornamental grasses offer long seasons of interest, colourful or texturally interesting foliage, movement, fragrance, seed heads or pods, and winter interest.

A perennial with many of these characteristics is butterfly weed, Asclepias tuberosa. If orange is a tough sell, try using the cultivar ‘Hello Yellow.’ It blooms for six to nine weeks in July and August, has interesting seed capsules in late August and September, needs no staking, is a magnet for pollinators (particularly Monarch butterflies), and needs only to be cut to the ground in early spring. This is the perfect perennial for a naturalistic design; it will thrive in full sun and average to dry soil. 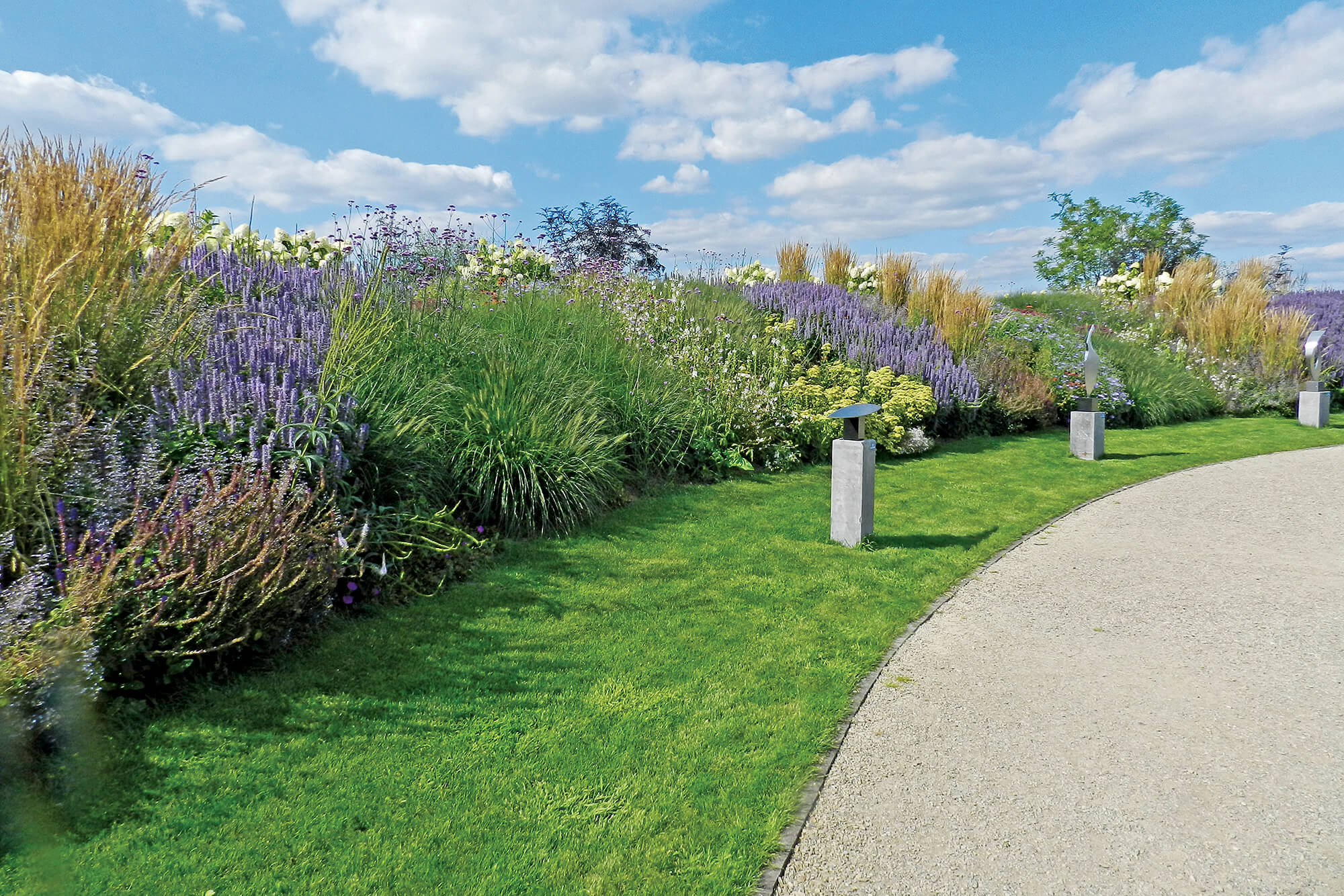 In this long bed at a German display garden, groupings of Calamagrostis ‘Karl Foerster’ are used repeatedly as punctuation marks. One of my favourite perennials for constant change is upright Sedum (stonecrop). Best known is ‘Autumn Joy,’ but I also use ‘Neon’ because it is shorter and doesn’t flop as much. This is a Zone 4 hardy perennial for hot, dry spaces. The early spring rosette is attractive with its succulent leaves, but stonecrop really comes into its own starting in July when it resembles short heads of broccoli.


Large-scale thinking
Large commercial properties require large masses of plants for impact. If they are arranged somewhat naturally, as in drifts which feather in and out, they will not look artificial — as do masses of plants lined up like soldiers or in blobs. A huge shopping centre on Long Island utilizes sweeping masses of perennials and grasses in most of the beds, including difficult-to-mow slopes on major streets. Since large properties often consist of several beds, repetition is an easy way to unify. Use a specific plant in many of the beds, use a particular form such as pyramidal or mounding, use a specific texture like that of grasses, or use one colour with groupings of one or several genera of the same colour. 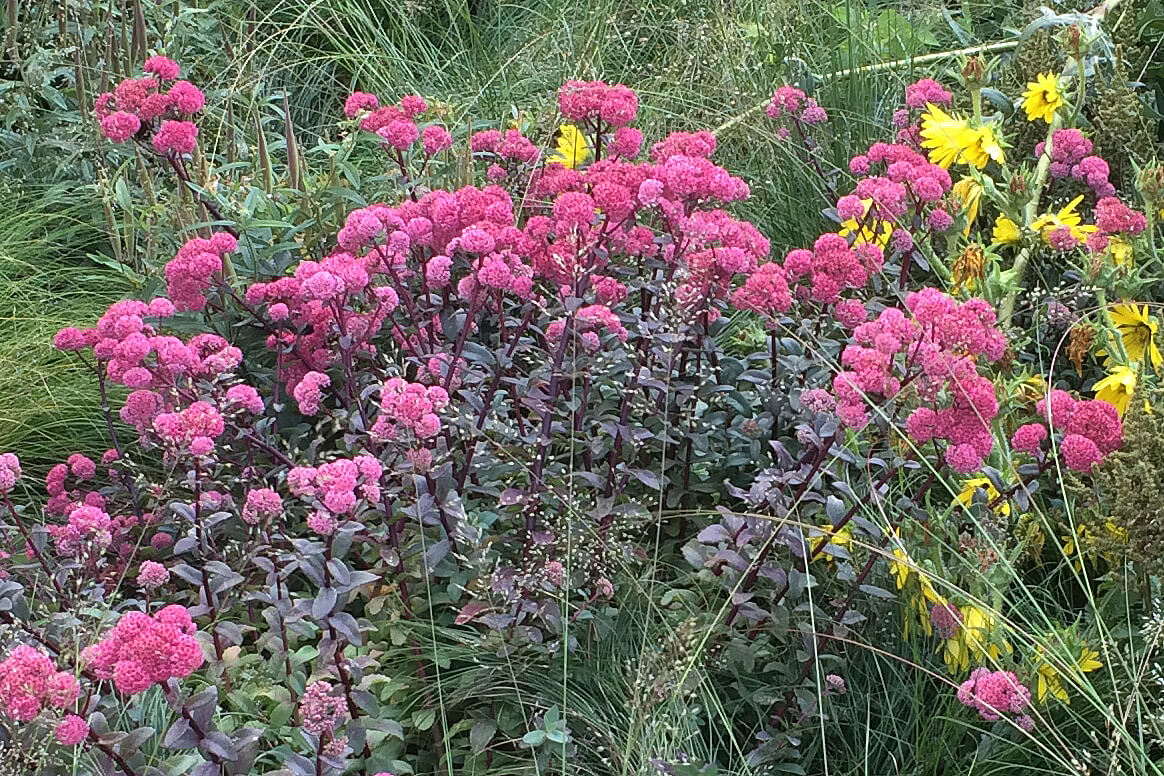 In late August, at New York’s High Line, the heads of Sedum ‘Red Cauli’ turn rosy pink, this time acting as a textural foil for Silphium laciniatum (compass plant) and Sporobolus heterolepsis, both hardy to Zone 3. 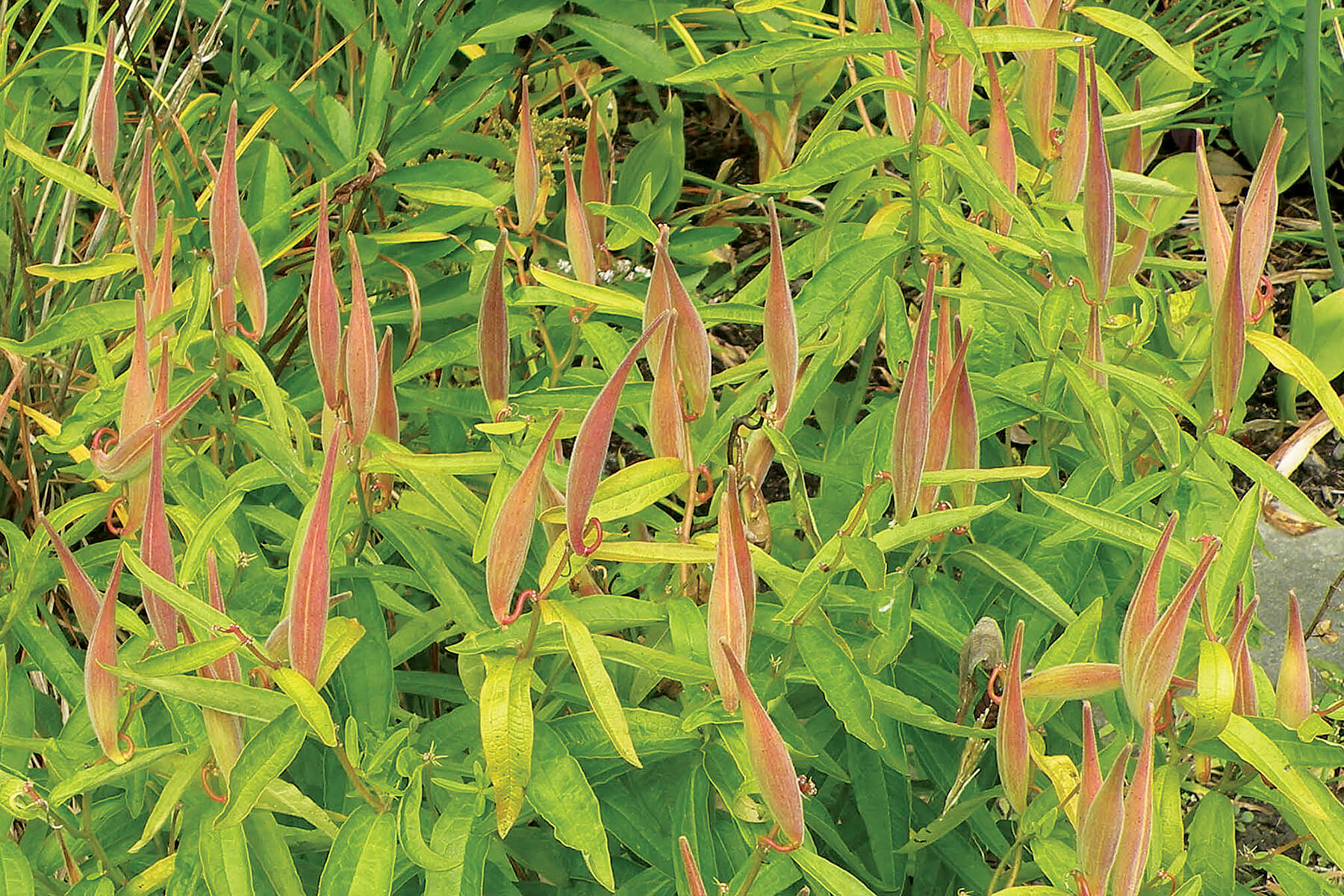 Colourful butterfly weed pods add another season of interest to the landscape.
Calamagrostis acutiflora ‘Karl Foerster’ is an ornamental grass I often use for its early foliation and long bloom. Hardy to Zone 4, this grass, when in bloom, has a very stiff, linear form that echoes the rectilinear design of many office buildings. It provides great contrast to the looser form of many perennials, such as Agastache ‘Blue Fortune.’ Plant ‘Karl Foerster’ in full sun, even though many books and catalogues say partial shade will do. In partial shade, it will lean or flop. Cut to the ground in very early spring.

Remember, not all commercial properties are blessed with sun. For partially shaded, moist areas, Ligularia dentata or stenocephala leopard plant cultivars are an excellent choice. The foliage is just as important as the flowers, adding interest to the garden from the minute it appears until frost. Leaves are large, rounded, often serrated and can be green or bronze or purple. The blooms are either golden yellow, daisy-like flowers or clear yellow tall spikes. Given optimum moisture conditions, prolific seeding will occur, meaning the area will fill in quickly. Flower stalks remain upright throughout winter and are very attractive when covered with snow. Simply cut to the base in spring.

Colour and space
Colours affect how and what the viewer sees. Want to make sure an entrance is readily apparent? Use hot, strong colours like red, orange, yellow, and white that are seen immediately from afar. Pastels like pink, lilac, blue and silver fade away, and often make an area seem larger than it is. If a colour scheme such as blue and yellow is used, it is important to use more blue, or the mass of yellow will be overwhelming. Shades are also important. Sulfur yellow will seem like a larger mass than pale or lemon yellow. 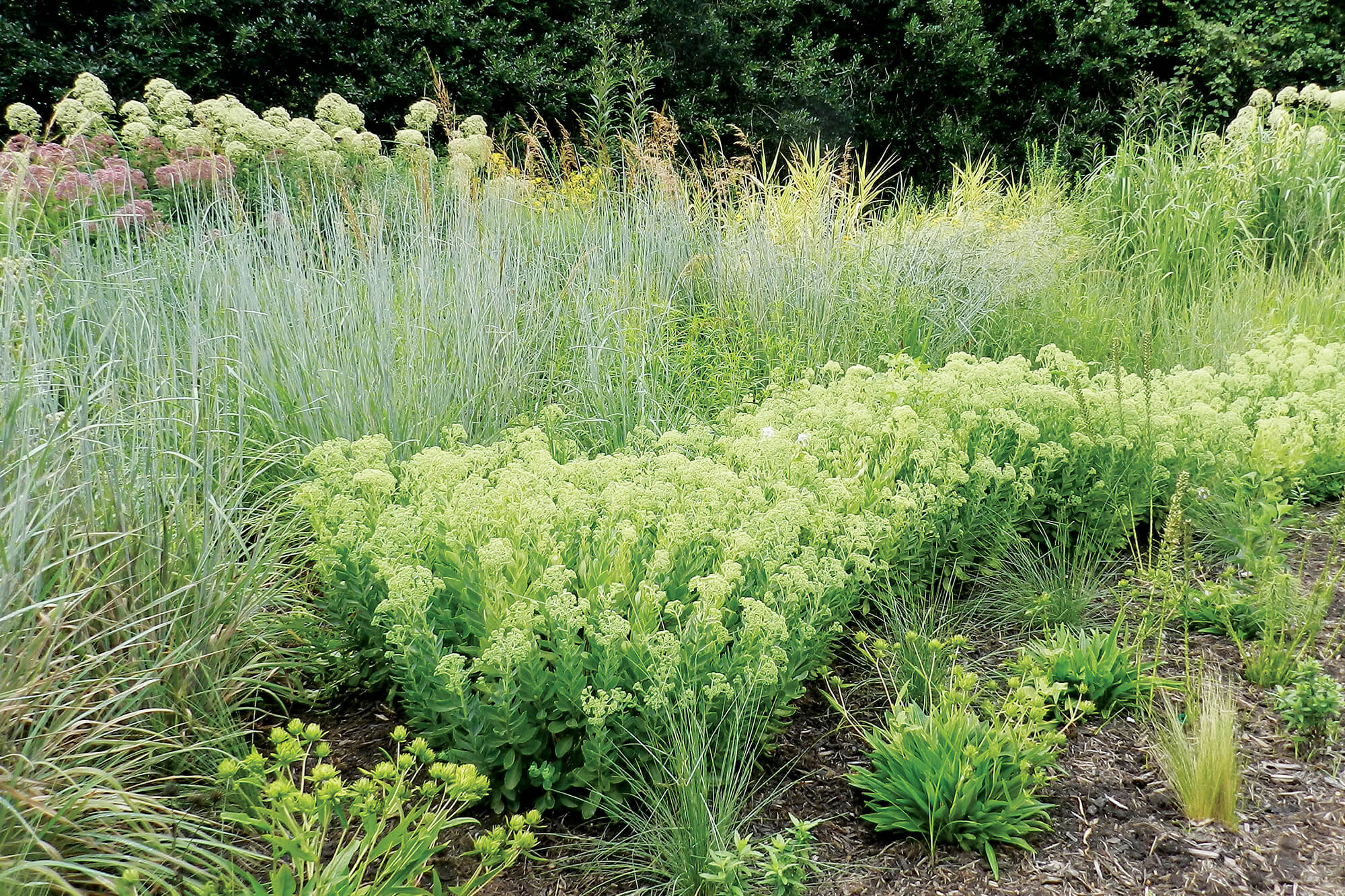 In July and August, at the display gardens of Hoffman Nurseries in North Carolina, the green heads of Sedum ‘Autumn Joy’ are the shortest element of a layered composition of Eupatorium ‘Bartered Bride’, Eupatorium fistulosum, and Sorghastrum nutans ‘Stainless Steel’. Beds on commercial properties are frequently bare during winter. When searching for evergreens to fill these beds, don’t forget about evergreen perennials. Many make excellent groundcovers for slopes and don’t have to be wrapped with burlap — which defeats the reason for using evergreens. Some perennials look like sculptures in the winter landscape and should not be cut until spring. Ornamental grasses are highly prized for their winter interest; their dried foliage and inflorescences sway in the wind, hold the snow, and add a more natural and appealing look to the landscape.

An excellent, but sadly neglected evergreen perennial groundcover is rock cress, Arabis caucasica. Hardy to Zone 4, its many small, white flowers cover the foliage in May and bring smiles to people’s faces. There are some rosy-pink cultivars as well. The fuzzy foliage is only an inch high, but clambers over the ground quickly. Excellent drainage in full sun is essential to prevent winter rot.

Cost control
Maintenance is always an issue. Clients usually want as low a bill as possible; the landscaper wants to make money. Many perennials and grasses are relatively low maintenance, particularly the grasses that only need to be cut down once a year in early spring (not Festuca or Helictotrichon). You can lower maintenance costs for your clients with careful plant selection, but you must educate them; there is no such thing as no maintenance. If you can hire or train people who are knowledgeable about perennial maintenance, you can provide specialized care and charge accordingly.

There are many more perennials and ornamental grasses that are just as useful as the ones I have highlighted for high performance and low maintenance.

Get double duty from the same space by interplanting the tiny bulb Anemone blanda, both blue and white, plus Narcissus ‘Tiny Bubbles’ that will push up through the Arabis foliage.

The golden yellow blooms of Asclepias tuberosa ‘Hello Yellow’ contrast beautifully with the blue of reseeding larkspur.
Bobbie Schwartz is a designer, author, garden consultant, and has served as president of Association of Professional Landscape Designers. She is based in Shaker Heights, Ohio.