Online to the rescue

In March, Anga’s Farm and Nursery, a family-owned business in Toronto, was gearing up for this year’s busy season, like every other nursery and garden centre across Canada. No one could anticipate the scale of the crisis that seemingly materialized out of thin air, as the Covid-19 pandemic did that month. Suddenly, borders were shutting down, provinces were going into lockdown and most businesses, except for essential services, were ordered shut. The coronavirus crisis emerged at the worst possible time for the horticulture sector, which relies on spring through early summer for peak business. If many businesses emerged relatively unscathed, it’s due to the speed with which they adapted, mostly by ramping up online operations.

Some were lucky enough to have had prior online experience. In Anga’s case, it was with social media. Manager Alex Anga said they had launched an account on Instagram about a year before the lockdown began. “Honestly, it was probably the best investment of our time,” she said. “Right now, we’re hitting almost 10,000 followers. We would advertise our plants, our prices, and customers would just call in and place orders. Then it got really busy, so we decided to put an actual web store on our website, and that just took off.” The company hired an IT solutions provider to set up its web store, which proved critical once Ontario allowed garden centres to offer curbside pickups. But the staff at Anga’s still had a lot of work to do for the web store in taking inventory, putting up photos, descriptions and prices. “All of a sudden we had to scramble…we all kind of just learned on the fly. We had a POS system in store, so it did link up with the web store so we could sell things online and it would reflect in our store sales as well,” Anga added. 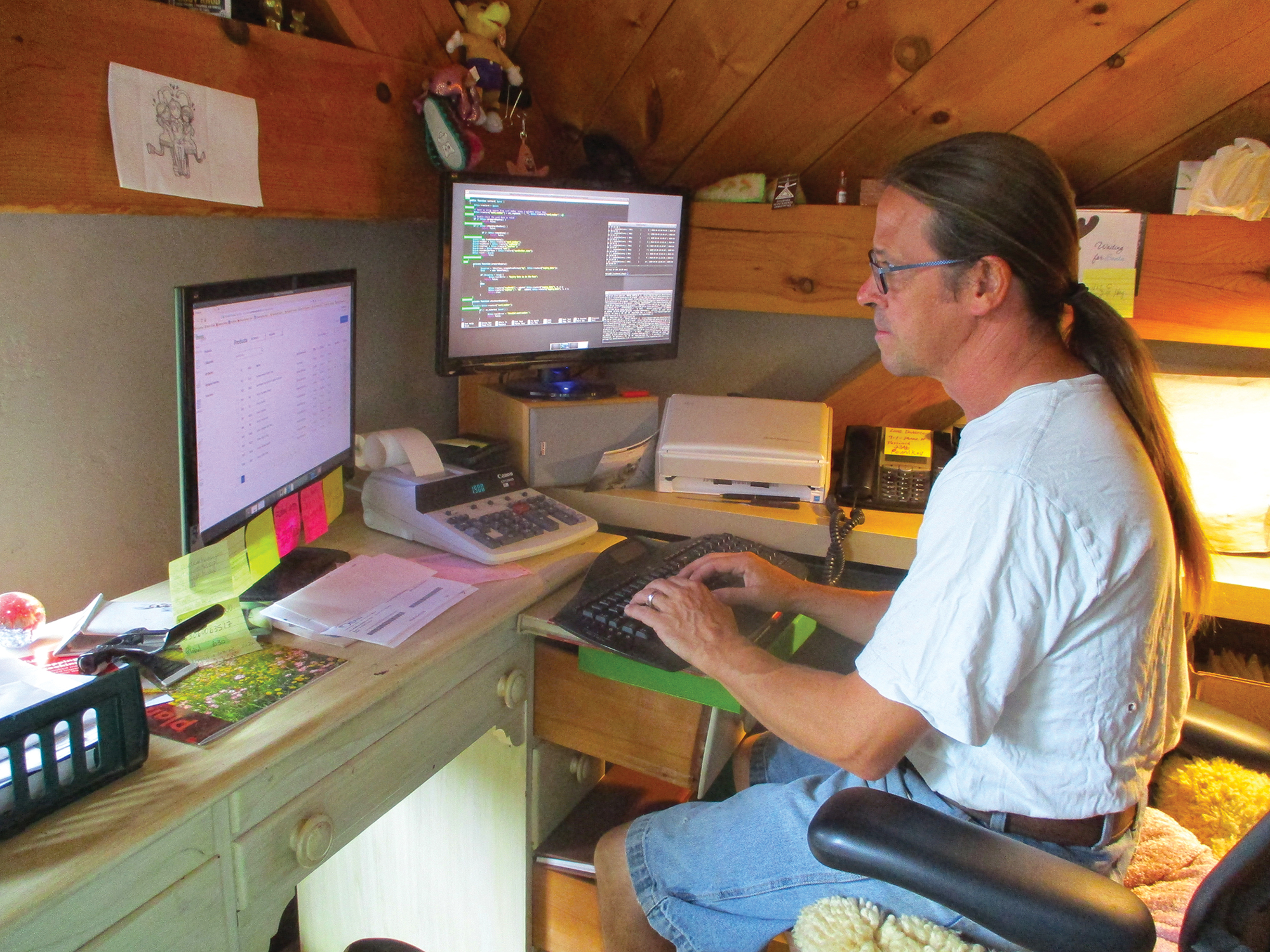 Peter Rofner of Richmond Nursery overcame connectivity issues, among other challenges, to improve online sales. ACROSS THE COUNTRY, in Chilliwack, B.C., Kristin Mayo was struggling to answer the phones at Bamboo World, a grower and seller of bamboo plants and products. The company had what Mayo described as a “hobby website,” set up by her father when he started the business 22 years ago. Short of staff due to the pandemic, and unable to spend enough time on the phone with customers while also managing sales through April, Bamboo World went online-only in May with its existing web store. As the family’s home, store and farm are located on the same property, they had to close their gates to customers during the peak of the pandemic. “It was just really, really hard because normally people come into the store, look around, read the signs and can ask someone if they have questions. This year it feels like everybody was calling on the phone and wanting to ask a lot of questions. There was actually about a whole month when I didn’t even have enough time to complete our orders,” Mayo, the Sales and Operations Manager at Bamboo World, recalled.

GIVEN THIS SCENARIO, digital enablers became important. Acceo, an IT solutions provider headquartered in Montreal, counts many small- and medium-sized garden centres across Canada as customers for software solutions covering inventory management, customer management, loyalty programs and gift cards. Paul Singh, Director, Business Development at Acceo, said they faced a surge in enquiries this year. “Over 70 per cent of our existing garden centre clients called asking for an integrated solution for online stores. The same software that is managing their physical inventory, they wanted to be synchronized to online,” Singh said.

AT ORDEREASE, a Barrie, Ont.-based digital transaction platform connecting wholesalers with retailers, the sharp spike in online activity was evident to managers. Vicky Lawrence, OrderEase VP, Customer Experience, said order volume being processed through their system for the garden centre sector went up four fold this year. The company also saw a five fold jump in enquiries from wholesalers and garden centres during the Covid-19 crisis. While garden centres realized they needed e-commerce, Lawrence noted this was “next to impossible” without wholesaler information. “Once a website is created, it’s a very time-consuming task to add all of the product including images, descriptions and pricing,” Lawrence explained. “OrderEase has solved this problem by developing integrations between some of the major eCommerce sites, specifically Shopify, WooCommerce, and Weebly. By enabling our simple connection to these sites, all of the supplier product information is passed through onto the garden centre’s website.” 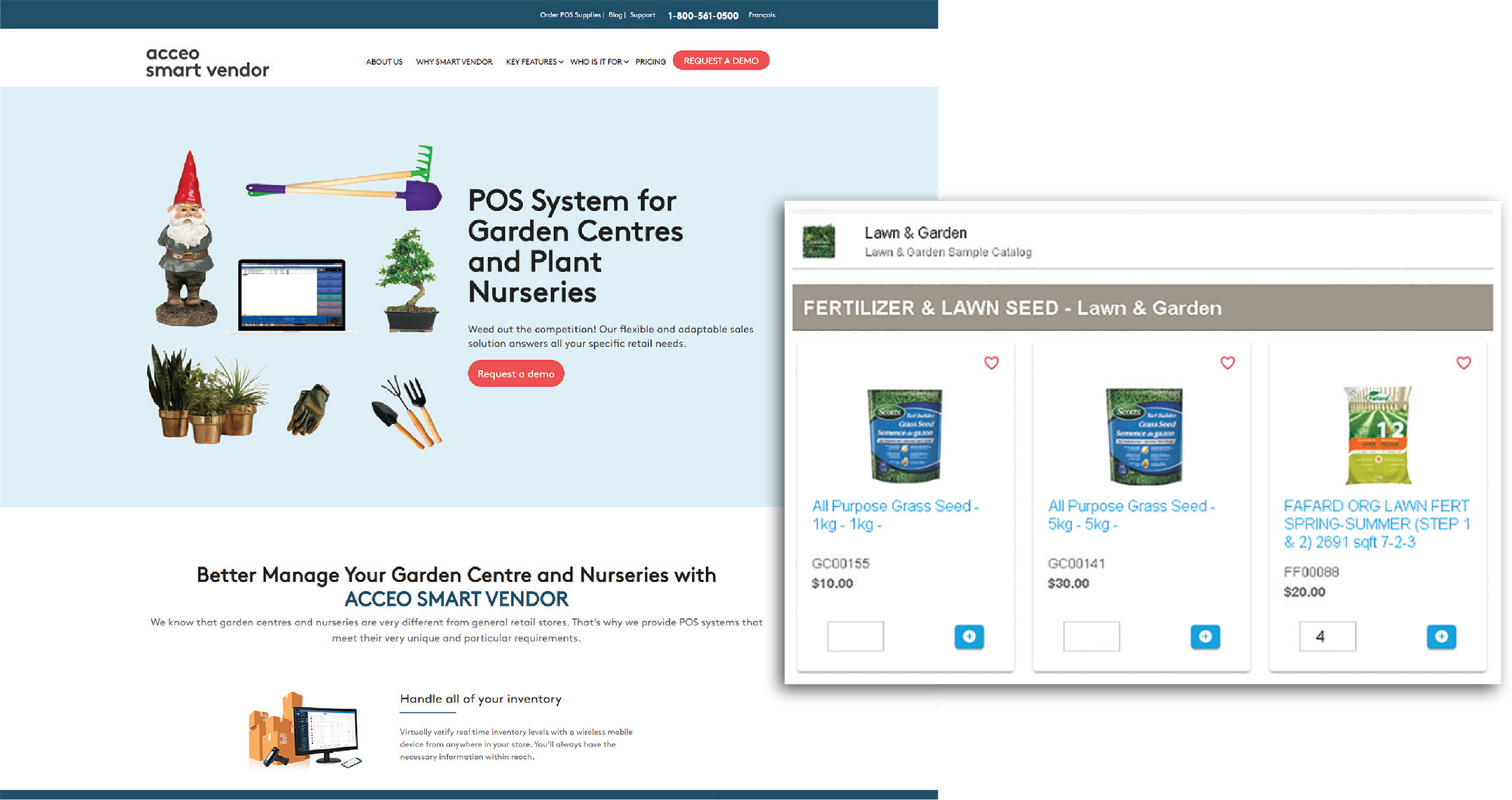 IT vendors were poised to help garden retailers get up to speed this spring. Illustrated here: POS information from Acceo and a sample catalogue from OrderEase. COVID-19 MAY HAVE CAUGHT the industry underprepared for the crisis, but ironically, it actually created more demand for garden centres and related suppliers as homebound residents took to gardening in greater numbers. Anga said its business surged this year despite the constraints of curbside pickups and limiting customers when stores reopened. “It didn’t matter which category; everybody was short on everything. It was so hard to find product, especially veggies and annuals. The growers were done so early this year, it was shocking,” she said.
But without a robust online store, Bamboo World’s sales took a hit, according to Mayo. “The problem with our website is the way it’s set up; we have to do everything manually. Even the form I get sent when I get an order doesn’t say if it’s for pickup or if it needs to be shipped out,” Mayo said, adding they plan to overhaul the web store soon.

THIS SEASON was also a learning experience for Peter Rofner, a second-generation owner of Ottawa’s Richmond Nursery. The business grows most of the plants it sells and also has a well-known pick-your-own strawberry field. Rofner had worked in the IT industry before, so he quickly set up a web store on his own using Open Source platforms, but says daily sales could hit only about two-thirds of normal volumes in April and May. “We had the ability to pull in as many orders as we would have got in store, but because of the restrictions with Covid and the spacing, there’s a peak you reach as far as how many you can ship out in a day,” he explained. By mid-June, sales had caught up to previous levels. For next year, however, Richmond Nursery will shutter its garden centre to focus on production and wholesale operations in a long-planned move.

AS GARDEN CENTRES UPPED THEIR GAME, some sectors of the industry where personal perusal isn’t necessary, like Fundy Compost in Brookfield, N.S., boomed even without a digital presence. Lisa Thiel, Sales and Environmental Manager at Fundy, said the store simply posted a banner on its website informing customers about pandemic-related precautions. Its delivery service was unaffected, and since its product doesn’t require much browsing or personal service, the company actually saw a 50 per cent rise in sales.

Due to the rush to set up web stores this year, not many garden centres were able to integrate them with their physical stores. In fact, Anga’s stopped taking online orders soon after the physical store was allowed to reopen. As Alex Anga explained, “By the time we post that we have maybe a hundred of certain plants on our web store, people in store would just buy them all, and it was really hard to keep inventory matched. When we got around to picking online orders, things had got sold out, so it was really difficult to manage both stores.” Richmond Nursery also closed its web store in July. 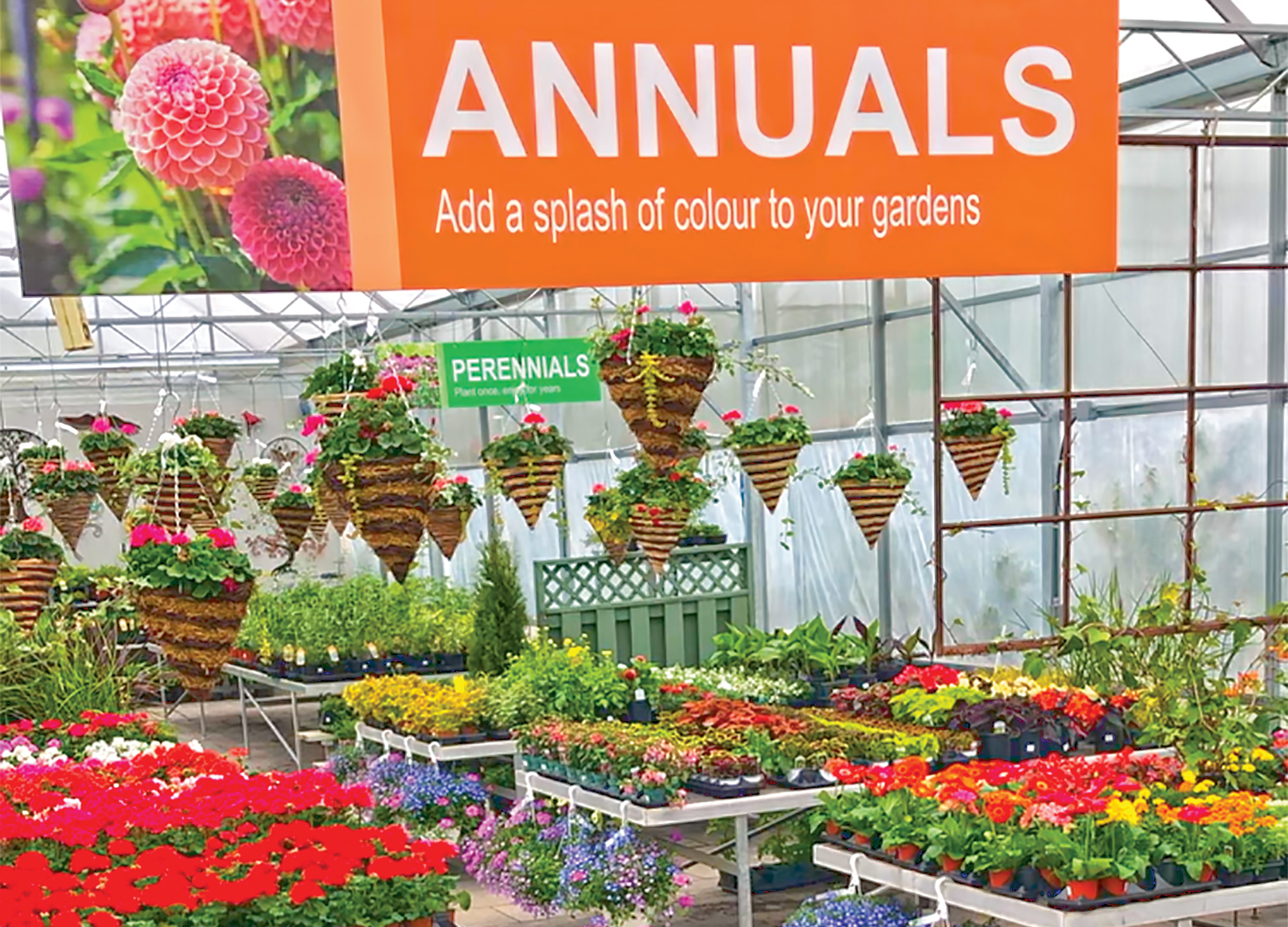 Anga’s successfully connected digital traffic with real colour and fragrance this spring. WHILE E-COMMERCE is firmly established in several retail sectors, it is not yet as popular for garden centres. That is partly due to the nature of the merchandise – unlike factory-made products that are available in standard sizes and other parameters, no two plants are exactly alike. Customers often like to choose individual plants, even with annuals, and especially with expensive shrubs and trees. “We’re not just a garden centre, but also a little bit of an attraction. So people do want to come into the store,” Anga said. Rofner added, “Online you sell a plant and if there’s one brown leaf, people say its defective and want a refund. Whereas if someone comes in, you can explain to them or just pick the leaf off and say, ‘Here you go, it’s fine.’”

Mayo acknowledged having a web store does have advantages. “When we’re not open for retail, we can focus more on the plants and making sure every part of the actual farm is taken care of,” she said. By July, Bamboo World was open two days a week, but did not post the information online to keep the crowds manageable.

However, even retail garden centres that took down their new web stores when the physical stores reopened, say they plan to retain this element in the future. Anga’s plans to go back online once the rush of peak season abates; Bamboo World plans to upgrade its web store. While their initial efforts to go online paid off during the crisis, the industry will need to make several improvements to make web stores more user-friendly, both for themselves and their customers. These measures include integrating the physical and online stores to reflect inventory accurately and optimizing web stores for mobile use, as well as adding mobile apps to reach a wider customer base. As OrderEase’s Lawrence points out, “More and more consumers are doing online shopping and expect that type of convenience. The best way to be better prepared is to adopt technology now, instead of waiting until something happens again.”

Covid-19 providentially introduced the benefits of gardening to a lot of new customers. With a green thumbs up to e-commerce, the horticulture industry can keep them hooked. Indira Kannan is a Toronto-based freelance writer.