The Synergy Park project was championed by Phil Paxton, Alpha Better Landscaping, and Blaire Cote, Foothills Nurseries. Together they rallied members and community groups to develop Synergy Park in Chestermere.

Members of Landscape Alberta came together for Canada 150 to donate two community green spaces as gifts to the people of Alberta. In Southern Alberta, just outside Calgary, members worked to turn an old skateboard park into a lush community park with the Synergy building. In the capital city of Edmonton, members worked as one to create a commemorative garden on the legislature grounds with a definite Canadian theme.

The Synergy Park project in Chestermere was championed by two local members, Phil Paxton of Alpha Better Landscaping and Blaire Cote of Foothills Nurseries. Together they rallied many members and created connections with community groups and local governments to develop a park that would foster community engagement and be a landscaping showcase. Volunteers and donors planted 81 trees, 415 potted shrubs and perennials, installed 354 cu. yds. of mulch and laid more than 40,000 sq. ft. of new sod. Chestermere city council had recently agreed to install irrigation on the site and a more robust landscape master plan for the area was developed.

At nearly the same time, another group of volunteers was building a garden at the hub of Alberta politics. Landscape Alberta reached out to government in late 2016 to inquire about donating a garden to the legislature grounds in celebration of Canada’s 150th birthday. From the outset, the concept connected the introduction of the new Canadian Shield rose to highlight innovation, in addition to the theme. Volunteers planted 150 of the roses in two beds encircling a large patio. At the centre of it all is a natural stone maple leaf-shaped bed that includes 13 roses (one for each province), all centred on the stunning backdrop of the legislatures bell tower with thanks to designer John van Roessel of JVR Landscape. Thank you to all the donors and volunteers for making these two projects a success. 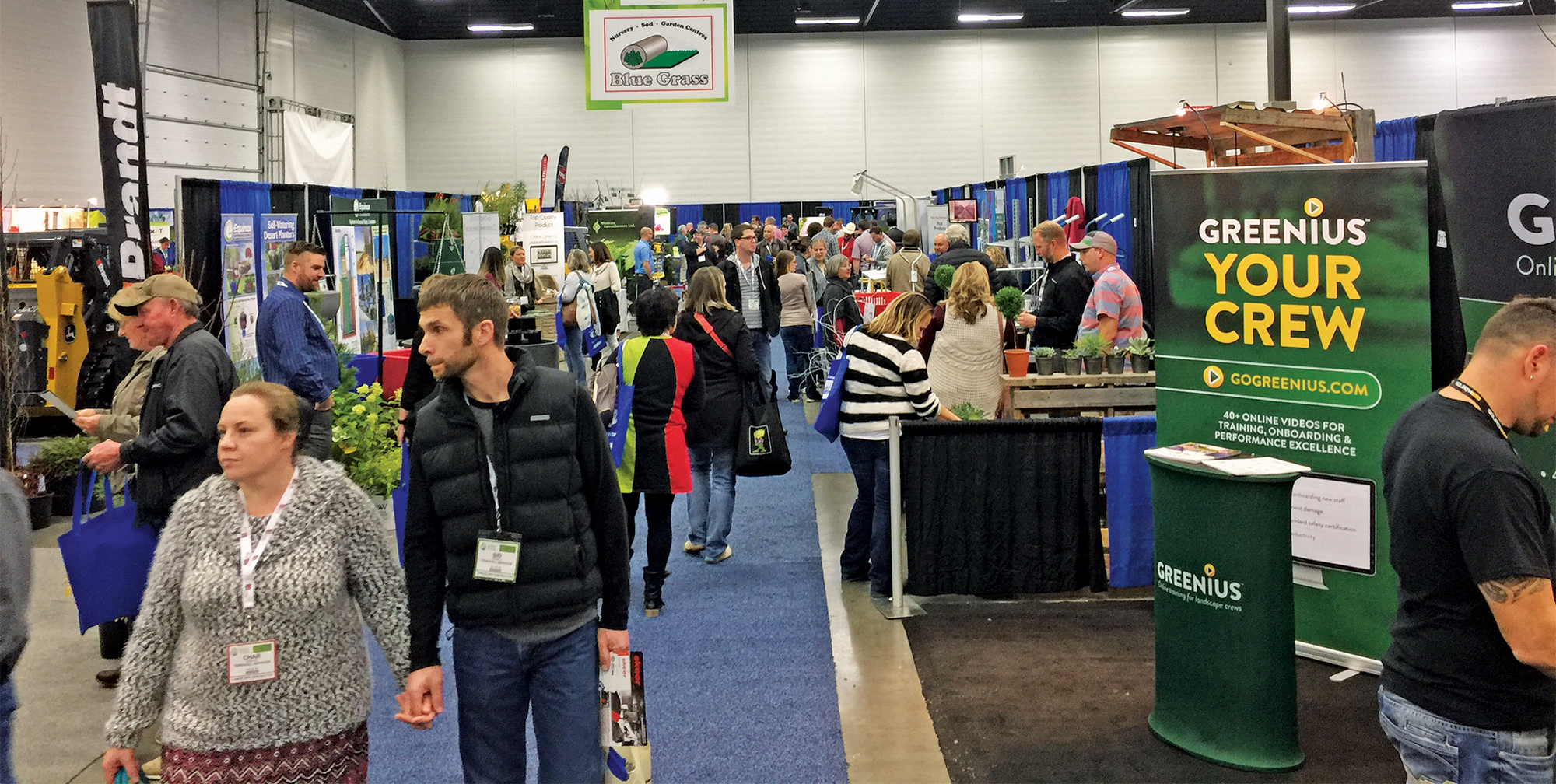 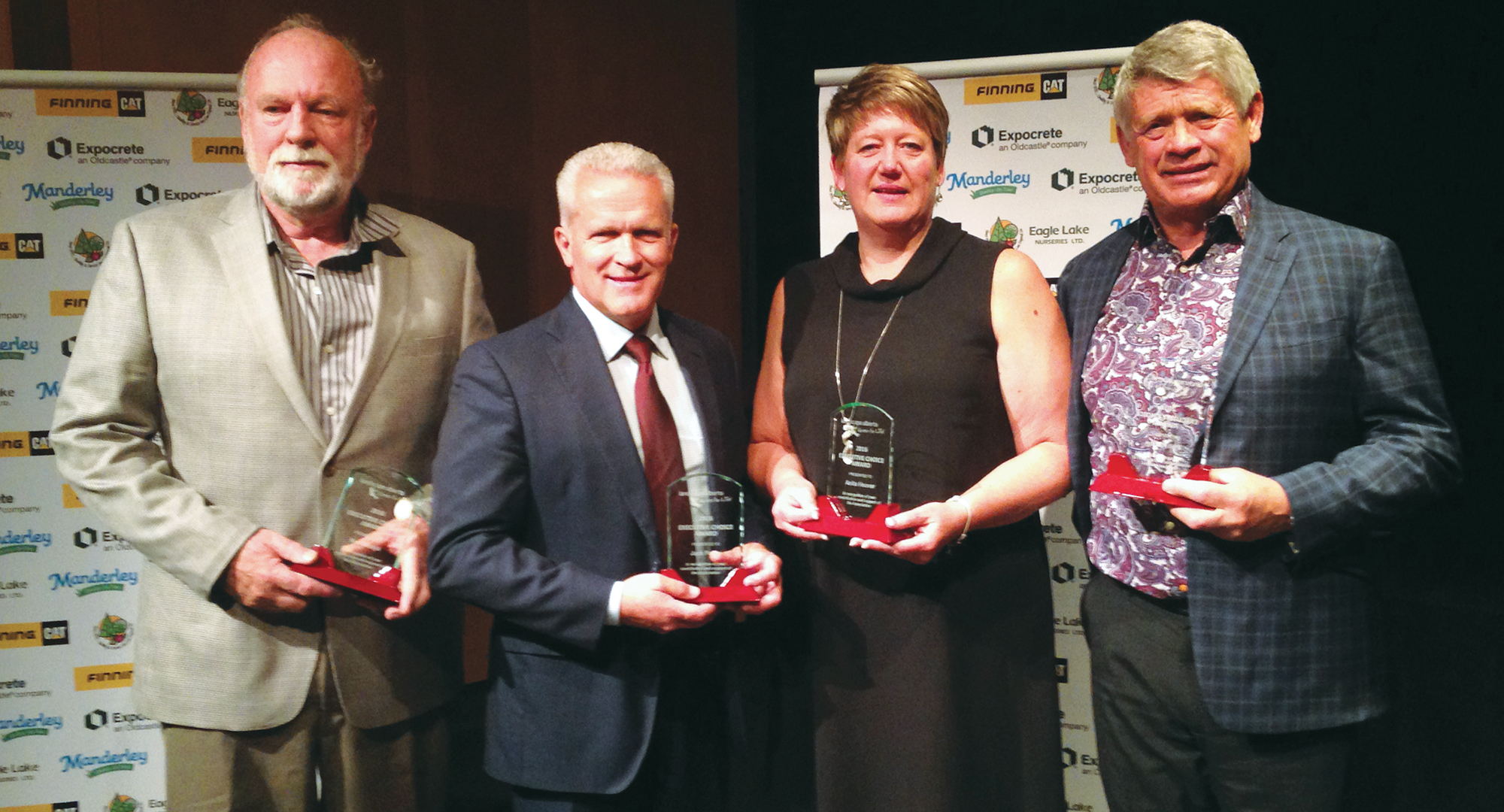 Our annual Landscape Awards Presentation and Dinner was held in March at Calgary’s Telus Spark Centre. This year, four recipients were recognized with the Executive Choice Award. The first went to Ron Oudyk from Land Tec Landscape Contractors of Edmonton for his commitment to raising professionalism in the industry through his support of the apprenticeship program, Ronald McDonald House and Skills Canada Alberta. The second award went to Jack Payne, of Classic Landscape Centre, also of Edmonton, for his keen involvement in development of the Canadian Landscape Standard. The third recipient was Phil Paxton from Alpha Better Landscaping, Calgary, for his role in bringing the Canadian Landscape Standard to life. The fourth award went to Anita Huever from Eagle Lake Nurseries in Strathmore, for her massive effort in the Bill 6 consultation process. The Executive Choice Award recognizes members who have demonstrated dedication to helping the association grow and achieve its long-term goals.

Gloria Beck presented long-time colleague and friend, Tony Heuver, with the Lifetime Member Award for his years of dedicated service to the association and to our industry. It is beyond well deserved and well overdue. Congratulations to Tony!

Team Alberta, Ray de Kok and Adrian Sinke, took first place, winning gold at the Skills Canada National Competition held in Winnipeg last June. Both competitors work for Caliber Landscaping of Coalhurst, Alta.
During the two-day event, the landscape gardener teams built a project that included a perimeter retaining wall, a deck, planter boxes, a patio and plant material, all within 12 hours. The Alberta team competed against teams from six other provinces, with Quebec taking home the silver medal and Nova Scotia taking home bronze. Congratulations to all competitors!

In March, Alberta Agriculture announced support for the province’s greenhouse sector by creating the Alberta Greenhouse Rebate Program (AGRP), allowing growers to apply for up to 80 per cent of the carbon tax paid on heating costs. The program allows Alberta producers to remain competitive with import markets.