Investment in conservation — and security

The green industry lives and dies by the weather. You can run a LEAN operation, with the most talented craftsmen and advanced technical knowledge, but if Mother Nature doesn't co-operate, the business will suffer.

This realization led Sheridan Nurseries' management to take a good hard look at the irrigation practices at its 870-acre operation in Glen Williams, Ont. Sheridan was required by the Ontario Ministry of the Environment (MOE) to apply for a Permit to Take Water from its local source, the Credit River, every year. The Credit River runs over 1,000 km from above the Niagara Escarpment and drains into Lake Ontario at the Port Credit area of Mississauga. It is highly valued as a naturally-maintained trout stream within Canada's largest urban area. Sheridan's vulnerability became apparent, as managers wondered what would happen if a Permit was ever denied.

"We noticed a change in local precipitation, combined with heavy housing growth in the surrounding area, that will probably deplete the natural aquifers and lower water tables," explains Pieter Joubert, vice-president nursery operations. "Some of our domestic wells at the residences housing our off-shore labour started to dry up, and we knew we had to do something to protect our water resource, and build in capacity for the company's planned expansion."

"We met with representatives from the MOE to ask, if we built an irrigation system that allowed for extensive water recapture, clean-up and recycling, whether we would need to go through the annual water permit process." Joubert believes Sheridan Nurseries was at the forefront of doing something of this scale, saying, "The Ministry was very interested with our proposal." 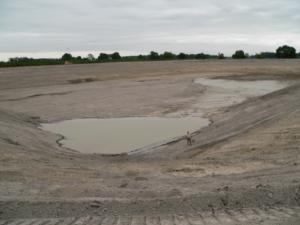 The excavation of the pond provided an opportunity to be grateful for indigenous heavy clay soils, which provided a natural liner.

Conservation first
The excavation of the pond provided an opportunity to be grateful for indigenous heavy clay soils, which provided a natural liner.In addition to the recapture system, the nursery took a fresh look at the way it irrigates crops. "Our goal was to increase production capacity by 40 per cent in a high water-usage area, while decreasing water use by 30 per cent," Joubert explains.

Working toward its conservation goal, the nursery gradually changed to drip irrigation in its liner beds wherever feasible. Drip irrigation is extremely efficient, as water is applied straight to the root zone, with less evaporation, and flow can be modified for specific crops. Sheridan has seen 60-80 per cent water savings using drip irrigation, compared to conventional overhead systems. Spray sticks are used in the pot-in-pot production area, and even trees planted in the field have drip tape laid out beneath the root zone. Joubert notes that once harvesting has begun, the drip tape is compromised and decommissioned, but by then the trees are large enough to manage with the natural rainfall they receive.

A capture pond that works
The next step was to figure out how to recapture, filter and store irrigation water, so it could be reused, minimizing the need to draw water from the Credit River. Joubert worked with AECOM (formerly Gartner Lee Ltd.), environmental consultants and engineers, to site and design an integrated water recapture and delivery system. The project was three years in the planning stage, during which, Joubert says, the MOE introduced more stringent water-taking regulations, which further underscored the company's commitment to water stewardship.
The water recapture system is made up of five parts: 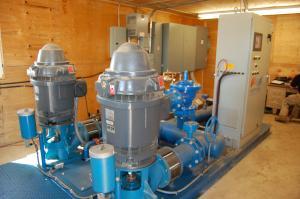 The pumps that drive Sheridan's extensive irrigation system are lighter than one would think for an operation this size. Pieter Joubert explains that because the pumps draw from two wells fed by the large pond, the system is already under pressure, so less force is required to push the water through the pipes.

Impressive engineering
Joubert notes this is one of the few irrigation systems that can pump water throughout winter. Because the pond is deep, the pipes are underground and the system is already under pressure from the wells, water is available 12 months of the year.

A critical part of the system was that water needed to flow both ways through main pipes in the irrigation system. When the pond level gets too low, supplementary water is pulled up from the Credit River to top it up. Because the river sits in a valley, two 125 hp pumps are necessary to draw water in a 16-in. diameter pipe, 400 ft. uphill at a 35-degree incline into the large holding pond, or it can be directed straight to irrigation zones in the nursery. Retaining their status as good stewards of the environment, the nursery employs sophisticated gauges at several locations in the river to measure current flow so water isn't removed at critical times.

Twice a year, in spring and fall, the pond level is drawn down and replenished with 30 per cent fresh water from the river. This helps to reduce a build up of salts and nutrient concentrations in the irrigation water. Electronic flow meters help manage the amount of water transferred in and out of the pond.

Industry recognition
This innovative project was recognized with the Environmental Award of Excellence at Landscape Ontario's annual awards ceremony in January 2011. The system took three years of planning and construction was completed in two-and-a-half years, almost year ahead of schedule. When the MOE was presented with the final draft report showing the recapture and irrigation efficiencies in hard numbers, Sheridan Nurseries was issued a 10-year Permit to Take Water, cementing its position as a steward of the environment and protecting the company against the unpredictability of nature. 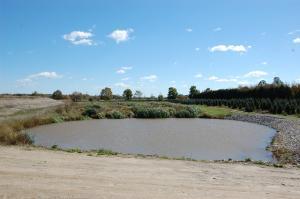 Pond facts at a glance