Michael Pascoe visited several countries in the far east scouting for possible field trip locations for Fanshawe College students.Over the next few issues of Landscape Trades he gives a horticulturist's perspective of gardening in some very different climates. 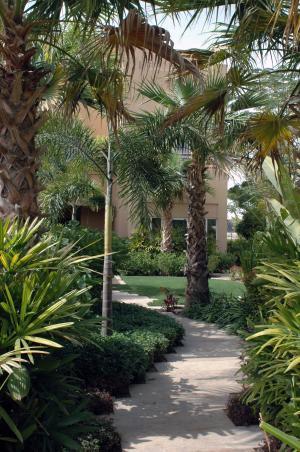 An urban retreat designed by Desert Group. The road allowances in prosperous subdivisions are often landscaped, and may feature tropicals such as agave and desert rose (Adenium obesum). (Photo: Michael Pascoe)
Dubai, with a population of 2.6 million in 2008, is one of seven emirates that are the United Arab Emirates. Located in the Persian Gulf on the Arabian Peninsula, Dubai has seen unprecedented development. Along with that development comes the need for landscaping, in a desert that presents challenges Canadian landscape managers would find incomprehensible.

In a climate where the summer temperatures can reach above 55° C, with annual  precipitation less than 120 mm, one would expect very little plant life to grow. That is actually the case. The local vegetation consists of date palms (Phoenix dactylifera), Acacia and the imported mesquite (Prosopssis sp.), as well as other minor species. These tough, resilient plants are found throughout of the country where the landscape consists of low and high dunes and flat, arid plains. Of course the United Arab Emirates is not all desert; there are mountains, rich coastal areas and of course the ubiquitous oases, where the vegetation is quite lush. However over 80 per cent of the country is desert; landscaping here has its challenges.

In coastal areas the humidity is almost unbearable, both to plants and people, but of course the paucity of water is the overwhelming challenge for all who design, build and cultivate landscapes. The drying heat climbs as summer approaches; by early April the temperature reaches 35° C at mid-morning and will climb rapidly to its July apex of 55° C. 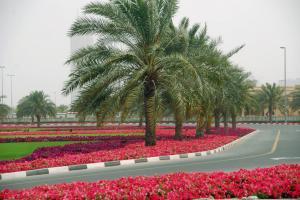 Most public landscape plantings are irrigated, like the masses of petunias planted alongside the highway interchanges in the downtown core. Water is filtered, untreated municipal grey water, often releasing a unique smell as it is sprayed through the irrigation heads. (Photo: Jeff Hicks)
Limitations for landscapers
Landscaping has severe limitations, including water, heat, soils, plant availability and of course the difficulty of maintenance in such a dramatic climate. Planting is thus relegated to high visibility, popular-use areas such as large government and high-profile commercial facilities, private residential areas, golf courses and the median areas in the downtown core.

There are several large landscape companies operating in the region; Canadian Jeff Hicks is project manager for Desert Group. Hicks says one of the greatest challenges, other than the obvious heat and humidity, is working with desert soils. Hicks states, "The pH of the soil and ground water is around 8; many plants such as the commonly used Rubiaceae family develop chlorosis above 7 – 7.2. Additionally, the soil is often very salty." He explains there are unusual things about the soil, once a young ocean floor, "It took me forever to understand that its elemental makeup can kill plants quickly, with no explanation evident in traditional soil tests." Calcium carbonate is a gas that is released from disturbed subsoil — excessive amounts are lethal to plants — however, as a gas, it does not show up on soil tests. Hicks's strategy to detect this lethal gas is to pour vinegar on the soil and watch for a chemical reaction. In instances where reactions were severe, planting had to be delayed.

Since there are so few landscape companies in the region, contractors such as Desert Group must be full service. Seven separate companies operate under the Desert Group umbrella, offering everything from swimming pool and water feature installation to turf services, golf course construction, wholesale nursery growing and a full-service garden centre, which on a recent visit even had a library where expats could get partial credit for novels and books they want to exchange. 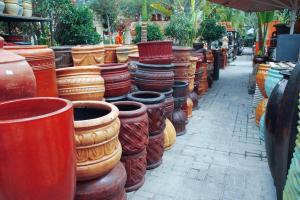 The Dubai Garden Centre features a wide variety of pots and urns, often quite large, many from the company's own factory. (Photo: Jeff Hicks)

Retail strategy
I would have expected to see something different in one of the very few garden centres in Dubai, and I did. Unusual because of the scarcity of residential landscape equipment, the garden centre offered gasoline-powered weed trimmers, hedge shears and lawn mowers. The Dubai Garden Centre became not only a retailer of such landscape gear, but also a regional distributor. Otherwise, this rare garden centre was the epitome of garden centres in Canada who serve high-end clients.

Where gardens are scarce and difficult to maintain, many have turned to container gardening, a culture that has evolved over hundreds of years in this region and is experiencing a renascence. The Dubai Garden Centre featured an extensive range of very large pots and urns, with many produced by Desert Group's own factory; the selection, row upon row, would shame most Canadian garden centres.

In a climate fraught with the obvious horticultural challenges, problems abound for the transplanted Canadian. Understanding complex soils, an intimate knowledge of irrigation and, of course, learning an entirely new repertoire of plants, are all in a day's work.

What about the employees? Hicks's first job right off the plane from Canada was to meet with a client's Egyptian and Palestinian engineers, Desert Group's upper caste Indian project managers and lower caste Indian and Pakistani tradesmen, Nepali and Bangladeshi labourers and a Filipino supervisor — their project: to build a roof garden in a climate where the temperatures already exceeded 35° C. Michael Pascoe is professor and academic program co-ordinator for the Horticulture Technician and Apprenticeship Horticulture Programs at Fanshawe College in London, Ont., and director of The Gardens of Fanshawe College and the A.M. Cuddy Garden.
Share
Tweet
Mail