Every trick in the book

Seven case studies on the lighter side of handling complaints

I really appreciate the company of gardeners, both beginners and those with substantial experience. Those who have paid their dues through experience or education are mostly hard-working, physically fit sorts who get up early to work in the garden, sipping coffee and ripping out weeds as they go along; they stay up just late enough to see the stars come out. Garden centres are full of them as employees, and as customers, too.

The vision of a landowner strolling through a tended estate is a romantic notion, which persists into this century. It presents a problem: What happens when your own personal oasis turns out to be not so much like Paradise and more like a bug infested, degenerating compost heap? This failure of vision causes a lot of complaints at garden centres.

My good friend Beth Endean and I are both descendants of farmers, and both educated in the same field unrelated to the garden centre industry. I estimate that we have jointly spent over 55 years in retail garden centre management positions. Beth’s garden was featured in the spring 2016 Toronto Botanical Gardens walking tour, hosting thousands of garden tourists carrying water bottles and wearing sunglasses and wonky hats. According to Beth’s observations, the garden guests were well informed and polite. These same folks come to retail stores, seeking help to realize their vision for a perfect garden.

We estimate we have jointly handled over 5,000 complaints… everything from, “Some weeds grew in my triple mix,” to “I couldn’t bring back the emerald cedars because they won’t fit in my convertible sports car.” I asked Beth to comment on the art of complaint handling.

CASE STUDY 1:
Trying every trick in the book
Many years ago, Beth had a bulk delivery order for loose triple mix to be used for top-dressing. Five yards were ordered, loaded by Beth herself and delivered. The truck was so heavily loaded it could barely turn along Toronto’s Yonge Street. The customer spread the product and then called to say the volume was not what he had ordered, the product was not good quality, the delivery cost was too expensive ... and a cascade of complaints continued until it became apparent the customer actually wanted a couple of free yards of soil. Finally, tired of discussing the matter, Beth concluded the conversation and negotiations by saying, “But, but, but… nothing!” At the time, it was a serious matter but now she laughs — it has become a clear memory from time spent in customer service. 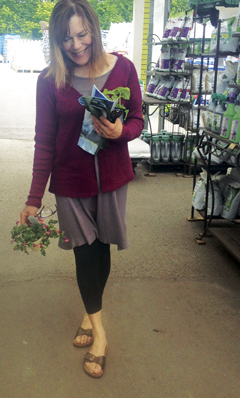 CASE STUDY 2:
Dead basil
A couple drove from Collingwood to Toronto to return two pots of shrivelled and toasted basil, a week after their purchase. It appeared that they may (!) have left these in the back seat of their car during a heat alert, while they went out to dinner in an air conditioned restaurant. Pointing to one of the two sad specimens, they explained it also fell over in the car and thus had no roots. The basil could not survive this abuse. I allowed a refund; they spent cheerfully and copiously on odds and ends for their garden… happy now! There can be a clear upside to a small investment in goodwill that allows a valuable relationship to continue. Because I replaced their basil, they allowed me to take a photo of their smiling faces — but it all could have gone badly and sadly wrong in a different direction had I denied their claim.

CASE STUDY 3:
Out of the cold and dark
A sheepish gentleman came into the garden centre to make a warranty claim, with proof of payment for all his purchases from the previous year. He had placed all the plants in his garage, in their pots, over-wintering in a cold, small and dark space. He watered them “from time to time,” he said. Two adult children who lived with him never planted the material, as they “just didn’t care about the garden and treated my home like a hotel, moving in and out for months at a time.” This last comment was not the result of a query! The gentleman’s mobility issues affected his ability to move around his garden, and he was therefore unable to plant or further tend his purchases. The failure of vision here is that he did not carry through on his commitment to his hobby. He failed to “be a gardener” — or to love his plants, for that matter! I found this claim to be astonishing, although I gathered my wits and explained that while I had great sympathy for his circumstances, he could not make a warranty claim since the plants were never planted into a garden. This situation begs a philosophical question: Is the retail warranty for the gardener or the garden?

CASE STUDY 4:
Retail therapy
Sometimes a garden centre worker must also be a therapist. A well-read and experienced gardener was saddened by the departure of an experienced staff member, whom she counted on for patience and good advice. I walked with her as she sniffled, fishing in her purse for a tissue all the way into the nursery. I held her arm, helped her pick out a clematis, staked it and escorted her to the checkout to conclude her excursion. I even gave her a slight discount and she went away feeling a little better. The customer is an excellent gardener and I have been fortunate to be invited to view her garden. She counts on the garden centre for therapy — both in the sense that her purchases are gratifying and senses are stimulated. But she needed emotional attention too, in a way that is not quite part of typical retail service. 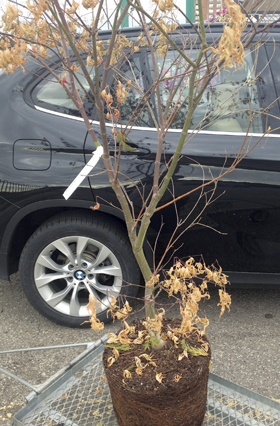 CASE STUDY 5:
The black hole blackboard
For another industry perspective I called Paul to get the from-the-trenches viewpoint of a landscape contractor. At first Paul said they never had any complaints, but then he restated that if he ever had complaints, he would fix the problem — always in favour of the complainant. Perhaps this explains why Paul and his son Murray have such an enviable retention rate. They have had many customers for 25 or 30 years. Paul explains he once had a complaint from an elderly man who received an invoice in his mailbox for lawn feeding, but didn’t see any fertilizer pellets sprinkled around on the driveway. Since the crew had done its job perfectly, the man couldn’t tell they had actually been on his property. Even when Paul installed an eight-ft. emerald cedar hedge for a client, and the hedge died over the winter, Paul decided to replace it at no charge. When I handle a complex complaint, I like to do a debriefing at the conclusion asking: Where did the first mistake occur? It seems that Paul observes this procedure too, and assigned this last complaint to “miscommunication” with the customer.

Paul muses, “Does a complaint ever end well?” Pretty philosophical for a landscape contractor! Two parties must come to a resolution, he states. “It doesn’t matter that you resolved it in their favour, as you may still lose a customer. Even if you fix the problem, you started with an unhappy and complaining customer. At the end of the day, the customer may believe only that they got what they paid for,” and may recognize neither the effort nor the expense involved at your end.

Paul has a big blackboard on the wall in his shop where he tracks requests and potential projects for customers. These are “no hurry jobs” that may get done eventually — expand patios, take down a hedge, etc. Some customers who are aware of the blackboard system ask that their jobs not be added to the Black Hole Blackboard, because it may be there for years and never actually get done. Many years ago, Paul and his brother worked together plowing snow. They plowed for a restaurant for a whole season, and when it was time to get paid, no funds were forthcoming. The very next time snow fell, Paul plowed, pushing all the snow up to the front door. I imagine the owner, chef and dishwasher all working together to shovel. Paul never got paid for the job, but felt that he had put all the snow back where it came from.

CASE STUDY 6:
Guerilla tactics
In my experience, some people feel comfortable threatening business owners with bad publicity through social media channels. In another age, such people wrote careful and thoughtful letters, and you replied in a considered and formal way. In this century people can “vent” in real time, quickly expressing their unhappiness and then “press send.” Otherwise-pleasant people you might meet at a dinner party (and decide they are nice enough) will hold you personally responsible for the deaths of two perennials, grown in pots on a balcony, and thus threaten to expose you on Facebook or Tweet something dreadful about your service. In fact, this isn’t a “service” issue at all, but a warranty claim. This is a tricky situation (with an obvious downside) that must be navigated carefully — as we all know that one unhappy customer can undo many hours of hard work and effort contributed by dedicated staff.

I always welcome back any truly unhappy customer for whom I was unable to find a satisfactory resolution, and often I will see them in the garden centre again that same season. I leave the door wide open and welcoming, in case they are remorseful or later come to their senses and come back for what really is excellent service.

CASE STUDY 7:
I want that kind of lawn
“I want the kind of lawn that tempts you to rip your clothes off and roll in the grass,” said the frustrated man who wanted immediate and perfect turf, deciding to both begin and end with a topdressing project. On closer questioning, he was unaware that good turf resulted also from feeding, weeding and watering, requiring sustained effort over time. Experience is a good teacher, both in the garden and in the garden centre. Patience and hard work are required for success on both fronts.

I gained a great deal of understanding into the art of handling complaints (and it is an art!) from observing many owners and managers in action. I was a quick study, and early on I decided I didn’t want a pot of geraniums thrown at my head — as happened to the first retail manager I worked with.

I carry much sympathy for all those who suffer from disappointment in their gardens, but I care just as much for their tortured selections, too. Who hasn’t been disappointed when something living dies? Last week, I said to a customer who had dropped a tomato plant on its head in the parking lot and broken the main stem in half, “Be careful with that next time, it is a living thing.” A fair amount of time in handling complaints is spent both coaching people, scolding them in the nicest possible way and offering instruction for future success, particularly for those who have neither patience nor the skill to achieve optimum results.

Diane Stewart-Rose is a graduate of the University of Toronto who has spent most of her adult career in the garden centre industry, working in management and as a consultant.
Published in the September 2016 issue of Landscape Trades