Back in the early 1980s, the provincial green trades association had a barbecue in Regina, Sask. It was a lovely August evening for a cookout, in beautiful Wascana Park. We were sitting with our lawn chairs forming an irregular circle, plates of food balanced on our laps. Soon, one of the members started up the conversation of how stupid one of his employees had been that spring. That discussion snowballed and many people joined in with stories of employees who couldn’t follow the simplest instructions. It was not a pleasant experience listening to this group of business people, trying to top each other with tales of woe.

Seated beside me was John Wigglesworth. He was an older gentleman, while at the time I was in my early 30s. John owned a sod farm near Saskatoon and I always respected how he carried himself. His business was organized and his turf was considered top-shelf. I learned to listen to what John had to say, as I knew he could be relied upon to point me in the right direction.

I turned to John and said, “I am not comfortable with this conversation of how stupid employees can be. My employees are good people and deserving of respect.” John agreed, “I, too, value my employees. They work hard and they make me money. If they don’t, I have to get new ones, but that doesn’t happen too often.”

EVEN THOUGH that conversation occurred almost 40 years ago, I remember it as if it were yesterday. It left a strong impression on me. I thought at the time, and I still think, those complainers did not realize how they were exposing themselves as bad managers and employers. If that is what they thought of their employees, and they were actually denigrating them in a public conversation, they needed to take a look at what they themselves were doing wrong. Thank goodness I had the support of John, and as time went by, I found others who treated their employees with respect. I noted those who treated their employees with the greatest of value were the most successful members of our trade. To move from the bush leagues to the big leagues requires a positive attitude and knowledge of the importance of respect.

Finding the best employees requires skill and effort. If we operate in a random manner and hire the first ones through the door, we can expect random results. References need to be checked, and that is where you will find discrepancies, and on occasion, exaggeration. During the interview, the simplest way of separating the wheat from the chaff (I am definitely a prairie boy) is to say, “Tell me about yourself.” No direct questions, as those often elicit stock responses. If you sit back and listen to a person tell you their story, it soon becomes apparent who will be of interest, and who is only passing through. Also, when you listen to a person tell their story, given enough time, you can also detect the con artists.

A FRIEND FROM SCHOOL DAYS went on to become a lawyer here in Regina. He was an excellent lawyer, and as a result of his hard work, he was appointed a Queen’s Bench Judge. I asked him if being a judge was difficult. He told me, “Most people think it is, but in reality, it is quite easy. All you have to do is to let people talk long enough, and it becomes readily apparent who is telling the truth and who is lying.” My experience of interviewing many candidates over the years matches the judge’s experience. You listen for a while, and it becomes readily apparent who you want as an employee.
Screening is important, and you cannot screen effectively if you are doing all of the talking. Asking predictable questions such as, “Are you a hard worker?” or “Are you honest?” does not get you anywhere. So don’t ask questions that are a waste of time.

Many years ago my brother managed a reputable bar close to downtown Regina. He kept problems to a minimum. His policy was, “If you don’t want trouble in your bar then don’t let trouble in the door.” He applied that rule to both employees and customers. The same scenario can be applied to us. When trouble appears, move on it quickly and without hesitation. Letting trouble develop because you thought it would resolve itself is almost a guarantee for escalation.

YOU CAN RECRUIT new and top-notch employees through job ads and the interview process, and you can find good employees through your existing ones as well. I have never understood companies that did not allow family members to work at the same store. My experience was this: I made it known that if an employee had a family member or a friend, who they knew was a good worker for certain, then let me know. At one time, I had nine staff members who had either a son, daughter, sister, or brother working for me at the same time. I never had a problem with any of those relationships. I found that if one of my employees had vouched for a relative or a friend, then he or she also took responsibility for that new hire. All of my employees who had their children working as students, made it very clear to their kids they were to be the hardest working members of the staff. No slouches, no complaining. As I have already written, I never had a problem with those family relationships in my garden centre. 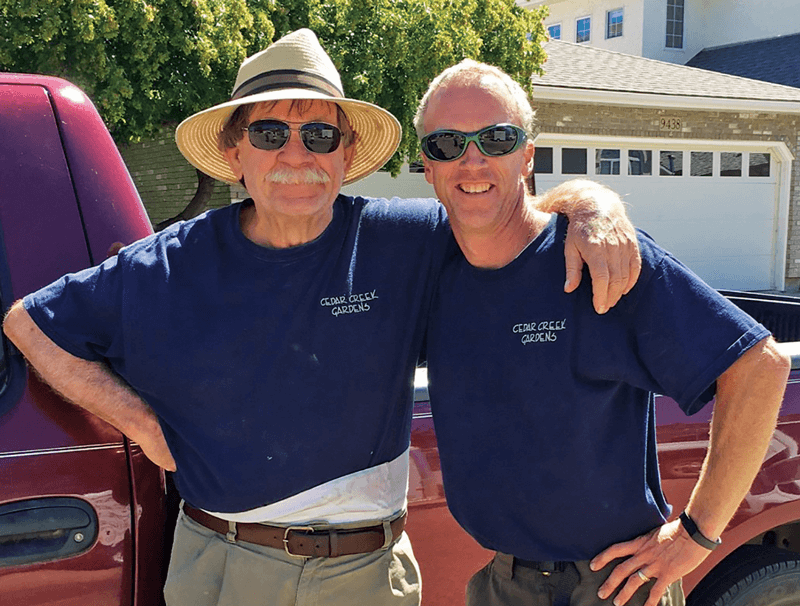 Connected for decades, Rod McDonald and Brad Crassweller of Cedar Creek Gardens in Regina came together through a family connection that benefited both.

I LOVE HAPPY STORIES, and in 1987 I had a university student working for me. One morning he brought in his kid brother, telling me, “Dad said he is to work for you today and you don’t have to pay him.” The younger brother turned out to be an excellent worker and I kept him, and of course, I did pay him. He stayed with me for four years while he attended Bible College. He was one of my best employees. Today, Brad Crassweller owns a greenhouse south of town, and I work for him, planting in the spring. It keeps my hand in the trade, and I am in my element when I am in a greenhouse, any greenhouse. The circle of life for us in the green trades.

I TAKE A LOT OF PRIDE in how well my former employees have done in life. Some have their own shops and others went on to have good careers in other professions. A 16-year-old student who had the most aptitude of any employee went on to become a very skilled, argumentative lawyer. No great surprise there. When you hire good people who work hard, it is not surprising their lives have been filled with positive outcomes. Take it as a compliment you were once a part of their journey.

When I had to let someone go, I had to accept either I had hired the wrong person or I had failed to train them properly on what was expected. Regardless, the proverbial buck stopped with me. If we take our responsibility seriously and provide our employees with opportunities to succeed, then we ourselves stay firmly on the road to success.