Winter is coming, and so are those slip-and-fall lawsuits. According to the latest numbers from the Canadian Institute for Health Information, slips and falls led to nearly 9,000 hospitalizations last winter. That was more than twice the number for hockey, skating, skiing, snowmobiling, and tobogganing injuries combined.

The bad news for snow and ice contractors is that all of those falls mean the potential for liability claims, not to mention higher insurance premiums every year. One contractor from Oshawa, Ont., last year reported a 400 per cent increase in premiums after one slip-and-fall claim. Another in the Toronto area said her premiums went up $10,000 last winter, even though she had never made a claim.

The good news, however, at least for those who can still afford the premiums, is that there are more tools than ever to help ensure properties are serviced to the letter of the contract. From business management software to GPS technology to weather cams, here is how four contractors from across Canada keep tabs on their properties and reduce the risk of those liability claims even reaching litigation. 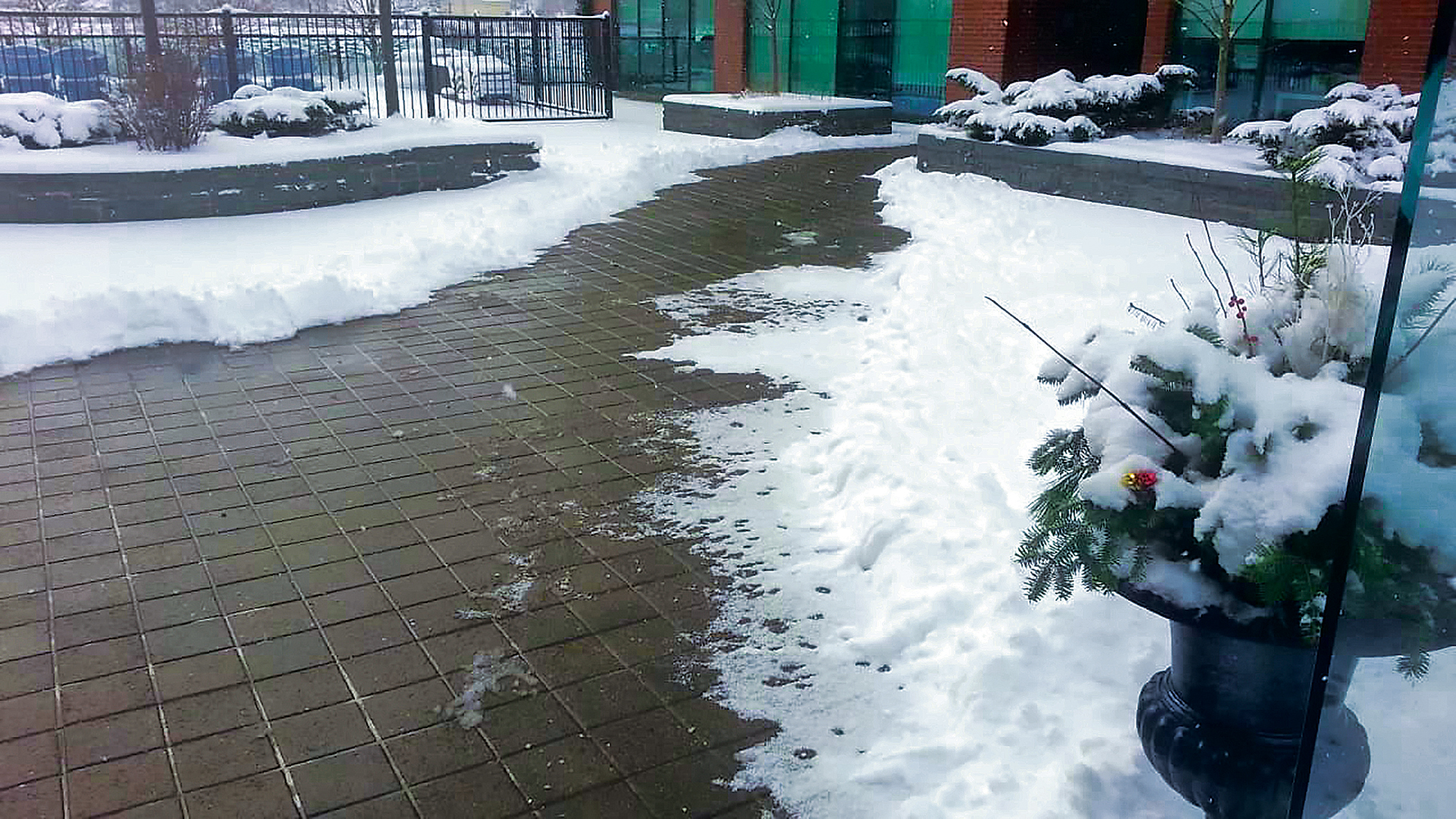 With 25 franchises in six provinces, Clintar’s documentation systems can’t be completely standardized. But Clintar’s manager of corporate training and health and safety, Krista Kent, says there is a level of documentation franchises have to meet, and the company does have recommendations. 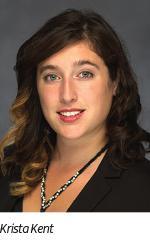 “We recommend, for instance, that they send a pre- and post-storm email to clients detailing the weather that’s coming, that we’re aware of it, and that we’ll be there to provide that service,” says Kent. “The post email would detail any issues they came across.”

Most Clintar franchises also use LMN to track when crews were onsite, though Kent notes some clients have their own service verification platforms that crews have to log in and out of. In recent years, many franchisees have installed weather cams onsite so they can monitor conditions live and make sure the level of service is appropriate.

Thankfully, Kent says, she can’t recall specific instances when these processes and tools saved the company from getting sued. Indeed, she believes they actually prevented the company from even getting to the discovery stage. She also believes the level of detail these technologies provide has strengthened client relationships and led to renewed contracts.

That’s why her main piece of advice for anyone trying to set up or improve a documentation system is to make sure it can give you the most detail possible. Staff training is key to that, she adds, because if those tools aren’t being used properly, they can’t really help you when you need them most. “It’s so crucial, right from day one, to make sure that training is consistent and ongoing, and to let staff know that if they have any concerns or obstacles, to let managers know so that it can be an easy transition.”

Kent says the company has had situations where employees weren’t happy about the data usage on their personal phones when clocking in and out of apps like LMN, so she recommends being prepared for those concerns. “Are you going to provide them tablets, for instance, or their own work phones? Or maybe you can give them a monthly allowance for data.”

Bottom line: support your crews and stay current with technologies that might help your documentation system, says Kent. “I think we’re a bit behind the U.S. when it comes to technology and processes, but these are going to become more of the standard. So, it’s key to always look back into your overhead and see where you can make adjustments, because things do improve, and new companies pop up that might be the supplier for your needs.”

Over the last five years, Mat Archibald can think of five instances where landlords of smaller commercial properties have called him to say something like, “Someone slipped outside my building and now they want money. What’s the deal? Were you guys there?” Within a few minutes, Archibald  responds with digital records, proving that yes, they were. “That ends it right there,” says Archibald, Trim’s president. 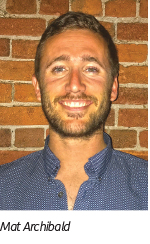 Those digital records usually come from a variety of tools, including the business management software LMN, which crews use to sign in and out of properties and to get job details, all from their phones. Trim also uses two other digital tools: a GPS system called Northern BI that tracks, among other info, where every vehicle has gone, and the Hilti On Track asset management system, which can provide a complete service history of every piece of equipment. Plus, Trim uses a private weather service that runs about $1,000 per month. “It’s worth its weight in gold,” says Archibald, because crews and clients depend on it, as does Archibald himself when claims are filed.

In fact, all of the tools Trim uses for documentation are worth it, says Archibald. While claims from smaller clients can usually be dealt with quickly, those for larger clients can require much more time and detailed information. “Those tools have definitely saved us many times, and the insurance guys like it,” says Archibald. “I’ve been told by many of our underwriters and claims people that the information I provide to them has made their ability to deny claims much easier if they see fit.” 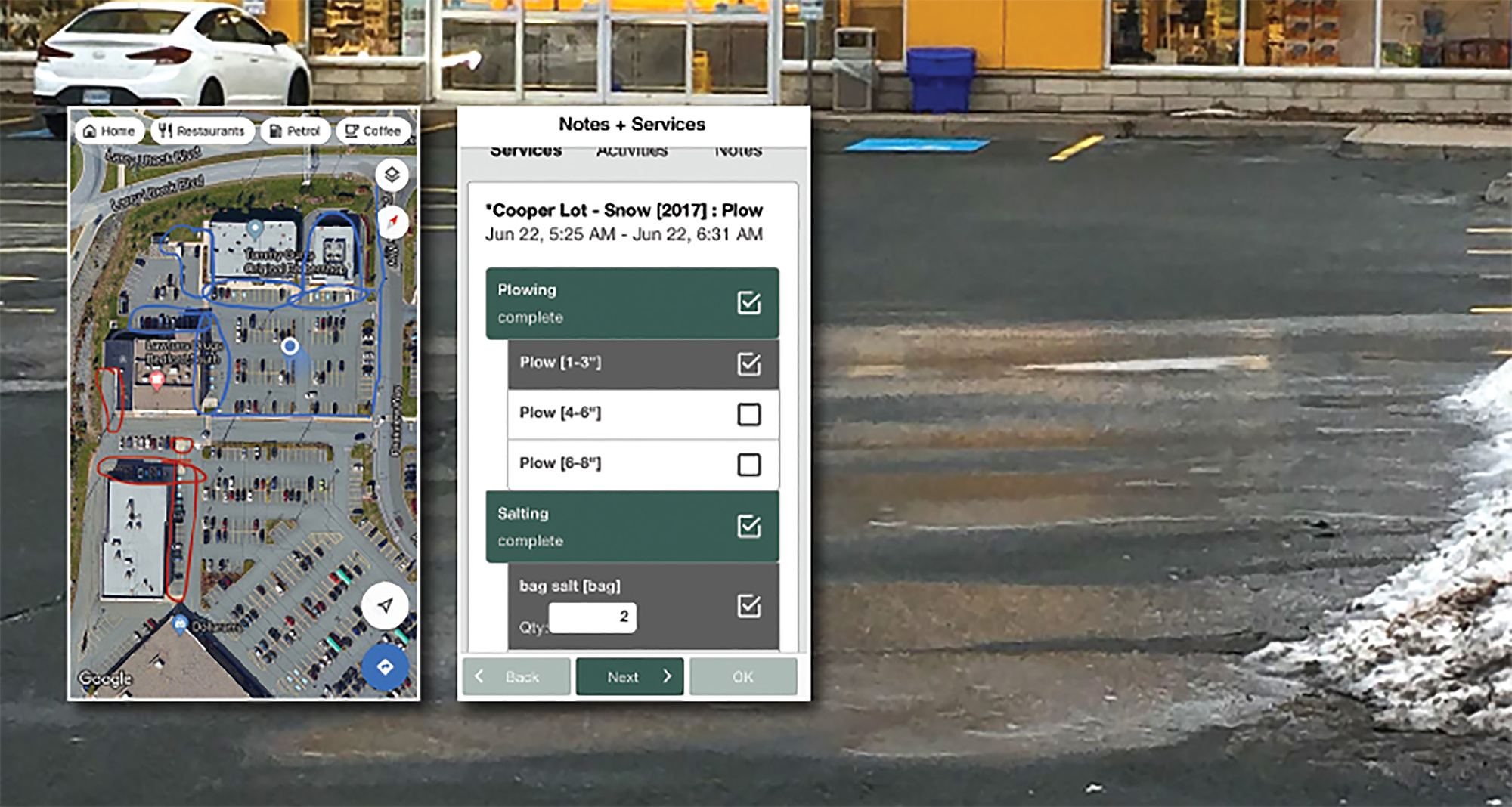 Trim’s system integrates annotated satellite images with service software and site photos. It’s only been over the past five years, however, that contractors on the east coast really started adopting digital documentation, says Archibald. Before, it was all pen and paper, which made the process for crews very time-consuming, especially for growing companies like Trim. That’s part of the reason it’s been straightforward to get buy-in from crews to use these digital tools, says Archibald.

For employees who aren’t too comfortable with smartphones and apps, Archibald says the company just has to spend a bit of extra time on the education side. “If you just tell someone to do something, the buy-in isn’t great. But if you explain why we’re doing this and that at the end of the day we’re just trying to keep the properties safe and make sure there’s documentation, we get buy-in across the board.”

For Chris Budrow, the first step to improving his company’s documentation system was with a risk assessment consultation from his insurance company. It happened over two days and about 14 hours a couple of years ago, but by the end of the audit it was clear what Ginkgo had to change. 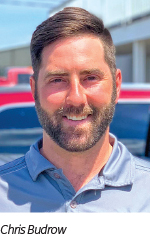 For one, they had to scrap the paper time sheets showing when an employee was at a property and go digital with LMN. (Ginkgo also uses GPS nodes on equipment to back up LMN’s digital time stamps.) “If it’s a paper time sheet and it’s not signed, it doesn’t exist,” says Budrow. “Unless the guy signed it, it means nothing.” It was the same with training. In the event of a slip-and-fall claim, Ginkgo would have to document when and how staff were trained, and with a signature.

That assessment consultant also reiterated something Budrow had learned a few years prior: photograph and document the conditions of your properties before the snow falls. In 2016, he was the division manager at Clintar in Moncton, and they had a contract for a Sears parking lot in the CF Champlain Mall. “That lot was a meteor shower,” he remembers. Yet that year the insurance company approached Clintar with a $60,000 claim and told them to pay it. Instead, Clintar handed over the photos of the pothole-ridden lot and the written details of the hazards they had sent the client before the incident. “It worked,” says Budrow. “We didn’t pay.”

Budrow has also found sometimes you have to build a little creativity into the system. At one seniors’ residence, for instance, Ginkgo actually moves every one of those residents’ vehicles before plowing and salting. “We do that a) because it’s cold out for them, and b) because I don’t want them to fall going to their car,” says Budrow. “It’s going to cost $150 to do that versus a $2,500 deductible and my rates are going up if someone falls down.”

Perhaps just as important as that creativity and those digital tools and that assessment consult, however, is training, says Budrow. He regularly attends seminars that touch on documentation and has even started a peer development committee for snow and ice contractors on the east coast. “I’d put education as more important even than advertising,” he says. “A lot of people might think that’s stupid, but your phone will ring for jobs even if you don’t advertise. But if you don’t know how to do those jobs, your phone’s not going to ring.” 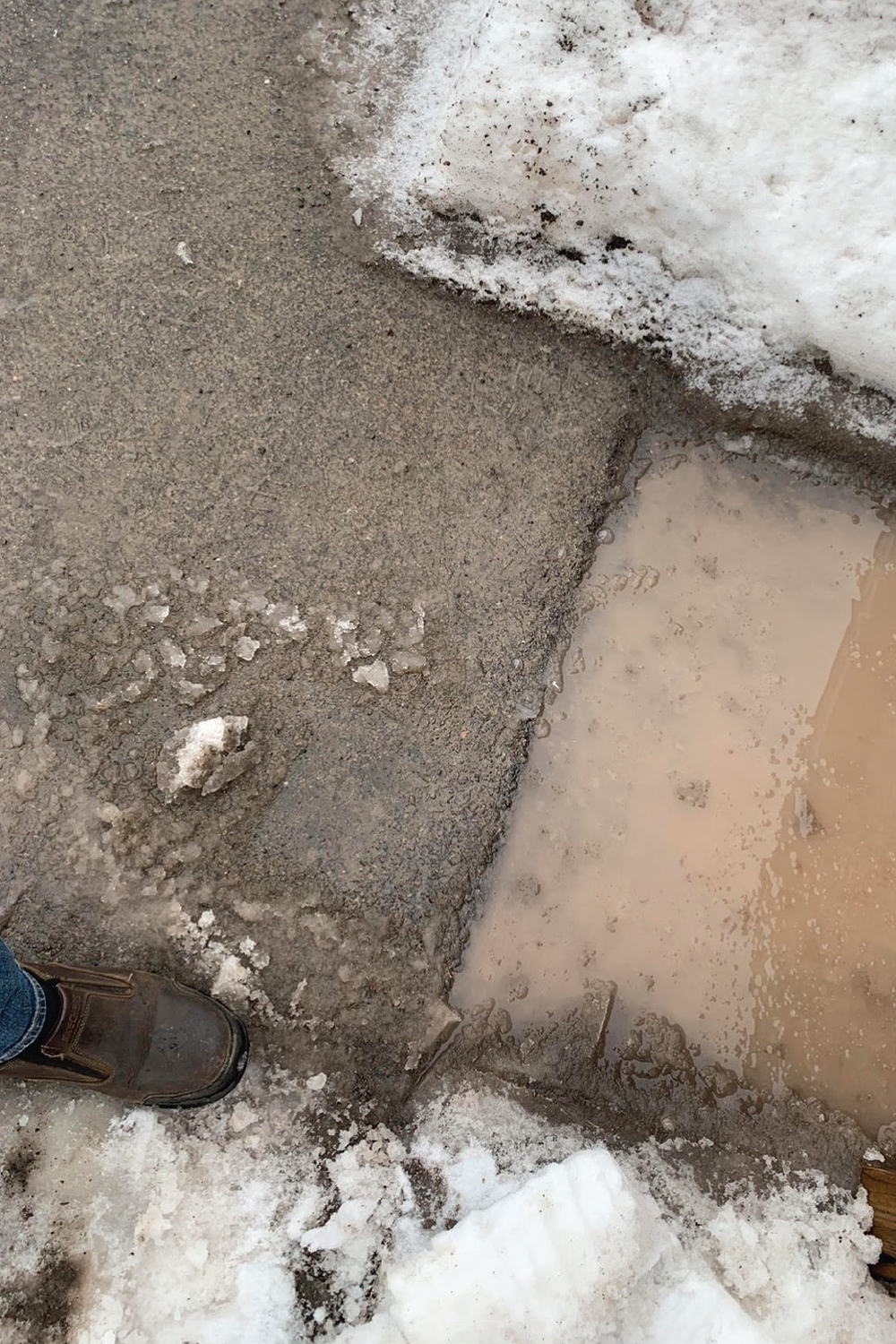 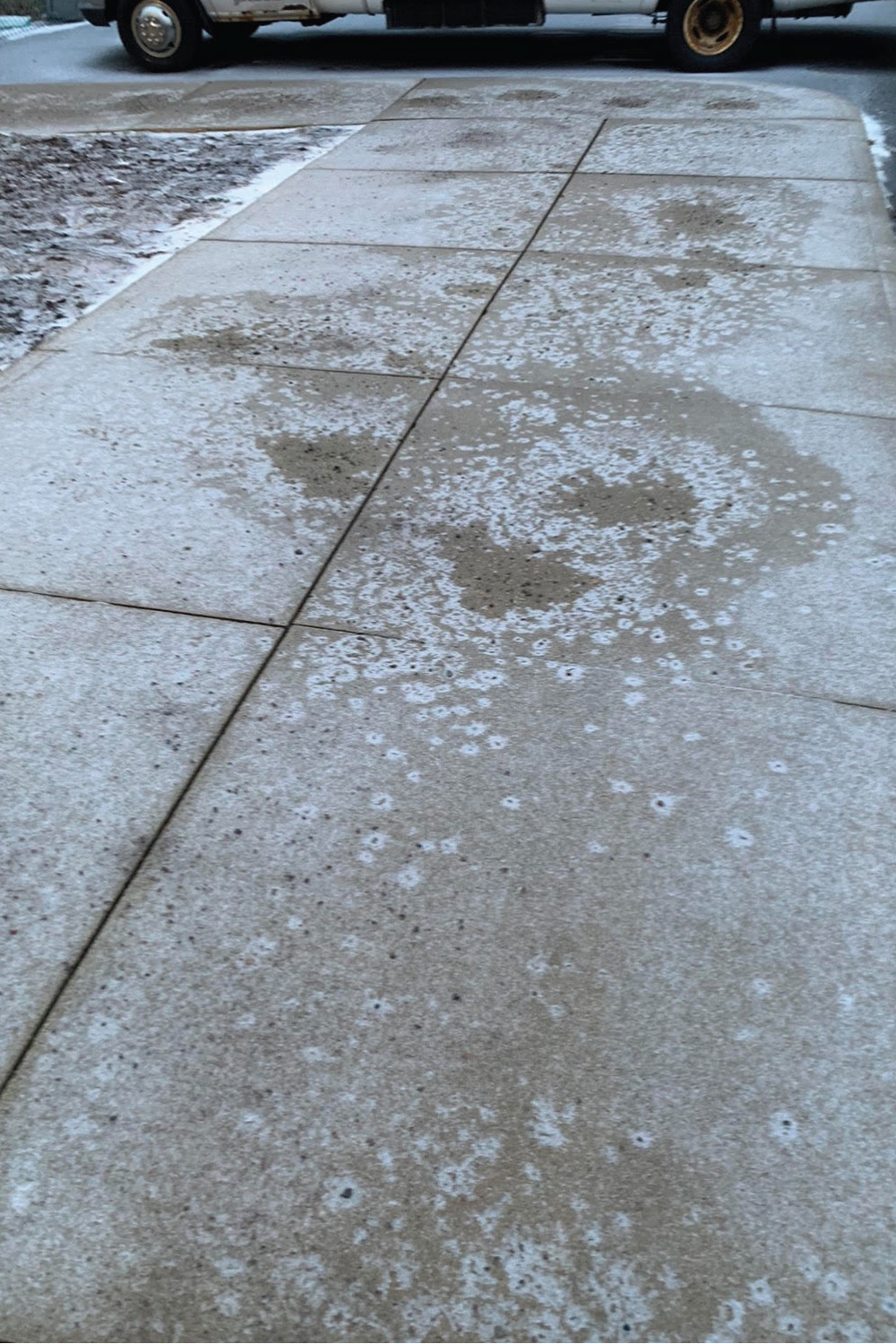 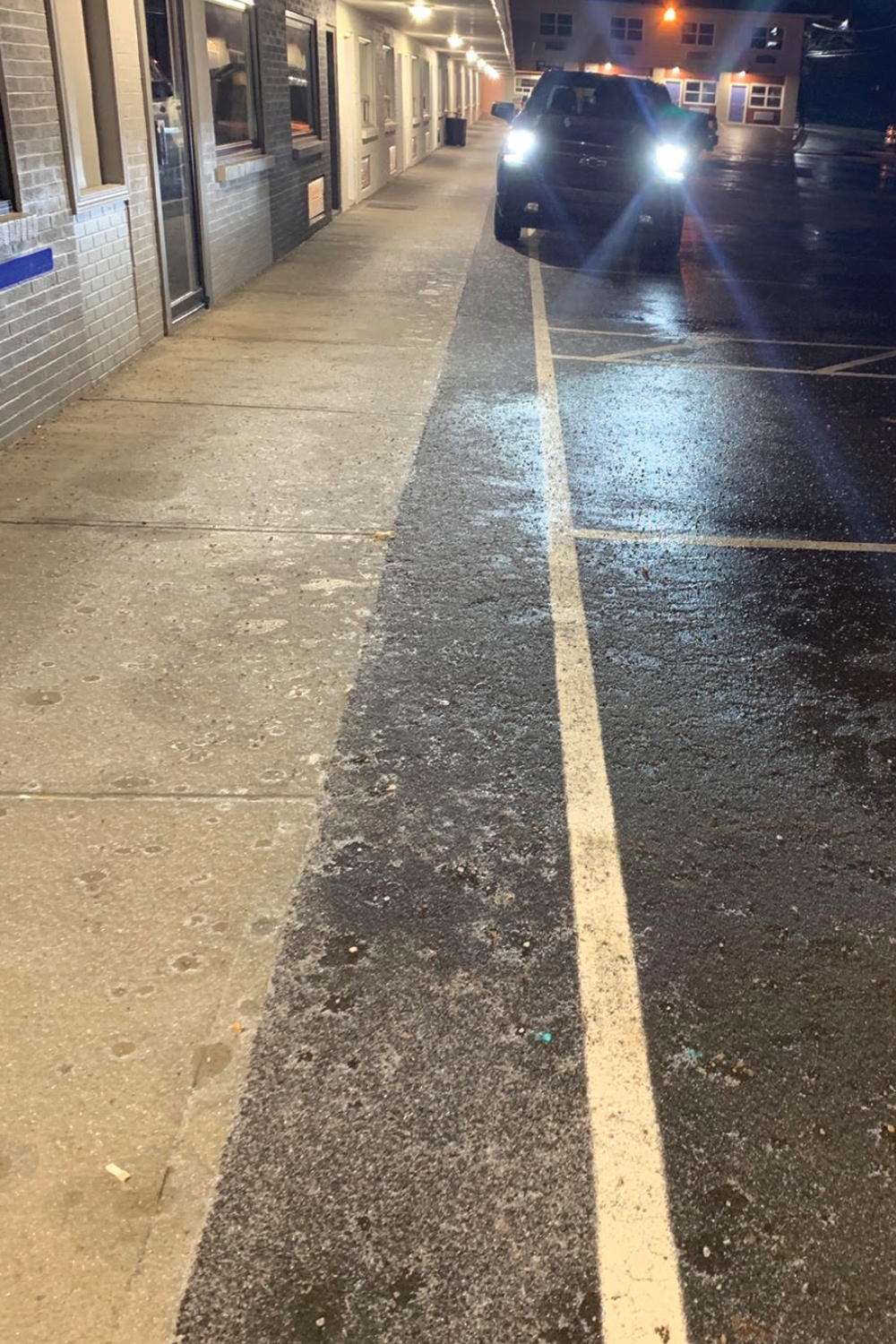 Above, asphalt is higher than the concrete and acts as a dam, leading to water and ice build-up. Ginkgo removed the walkway from its scope of work to reduce the risk. The icy walkways at right are from water coming off a roof that lacks gutters.

If there’s anything Geller’s owner Matt Bell has learned about creating a documentation system, it’s that you can’t craft it on the fly. “You need to sit down and spend the time required to first develop standard operating procedures for your employees before you can start dealing with liability,” he says. “At the end of the day, it doesn’t matter what you get a homeowner or commercial client to sign off on, because it really comes back to what you’re able to have your staff complete when you’re there in terms of documentation.” 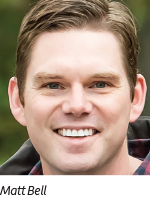 What works for Geller’s team is LMN and GPS. With LMN, Bell says it really helps them maintain a consistent and clean form of communication, as well as provide a high level of accountability. With GPS, Bell says it bolsters accountability and adds another layer of verification if the company does encounter any legal disputes.

Luckily, Geller’s has never had to deal with any legal liabilities due to slip-and-fall claims, but still, these two tools have paid for themselves and then some, says Bell. “We’ve found that we’ve really gotten a cost benefit just in billing back the clients. The systems detail when were we there, how long we were there, why were we there, what did it look like before, what did it look like after. And to have that basically at our fingertips makes it really easy from a management perspective.”

It helps that these tools are easy to use for crews, even for older employees who aren’t as used to new technology as younger ones, says Bell. Besides, he adds, they don’t really have a choice. “Company culture plays a big role in buy-in. It’s just: This is how we do it, and if you want to work here, this is how it has to take place.”

That doesn’t mean Bell ignores his employees when crafting Geller’s documentation system. Quite the opposite. “When you’re looking at developing a really bullet-proof system for tracking work, it needs to start with the end user,” he says. “You need to ask what he is going to be able to use efficiently and effectively and build from that point out.”

And again, that can’t be done on the fly. “You don’t start to develop a program like this a month before winter,” says Bell. “As crazy as it sounds, you’re best to start in February or March, when you’re in the winter, when you know what works. You get to test it out a little bit so that when you go into the following season you’ve got a bullet-proof plan already put together.” Jordan Whitehouse is a Kingston, Ont.-based freelance writer.
Share
Tweet
Mail