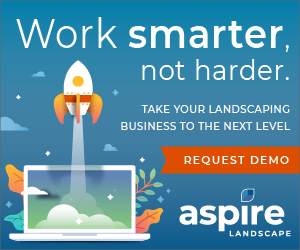 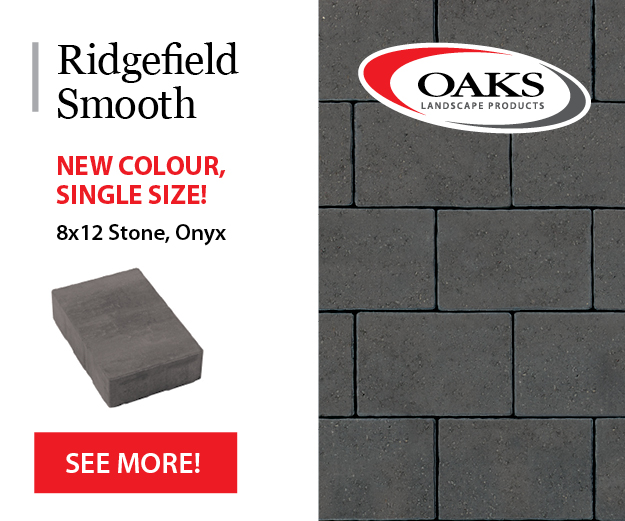 From setback to opportunity: Canada's grower industry embarks on a new era with the takeover of AAFC's ornamental breeding program 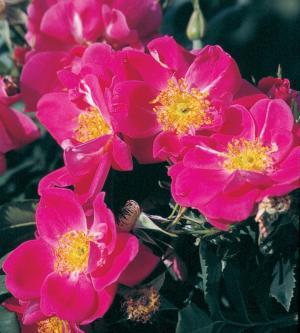 It has been more than 40 years since Martin Frobisher, the first Explorer rose, was introduced. It was developed as part of Agriculture and AgriFood Canada's (AAFC) ornamental breeding program, at the time located at the Experimental Farm in Ottawa and led by Dr. Felicitas Svejda. This white, cold-hardy and fragrant shrub rose was followed over the next few decades by several dozen cultivars of various colours and growth habits.

Much has changed since then. Upon the retirement of Dr. Svejada in the 1980s, the Ottawa ornamental plant breeding program was transferred to St. Jean Research Station in Quebec and Morden Research Station in Manitoba. Over the years, AAFC's breeding program produced a number of introductions on behalf of the grower industry and ultimately, the Canadian public. Both rose and Wegelia cultivars were introduced as part of the breeding program at the St. Jean Research Station. Under the direction of Dr. Campbell Davidson, the Morden Station program introduced cultivars of Forsythia, Monarda, Potentilla, Fraxinus, Populus and more. It was the Explorer series of roses, however, followed by the Parkland series, that became the signature of AAFC's breeding program. Today, these roses are known around the world for their many superior attributes, especially cold hardiness.

Says noted rose expert and author Bob Osborne of Corn Hill Nurseries, N.B, "The past several decades have been a tremendously exciting time for the northern rose grower. No longer do we need to look with envy at pictures of English gardens draped with colourful and climbing roses. Thanks to Agriculture and AgriFood Canada breeding programs, we now have at our disposal a veritable cornucopia of roses that are hardy, easy to grow, beautifully formed and disease resistant to boot."

Especially considering its Zone Three location, it can be challenging to think of Morden, Man., as a horticultural Mecca. But that is precisely what it became, thanks to the research station's primary objective of breeding winter-hardy landscape plants. Many local wholesale and retail nurseries developed strong ties to the research centre, and even more growers across Canada came to look forward to the opportunity to propagate and market the many new and improved varieties. The Morden Research Station became synonymous with hardiness, and today houses a large collection of prairie-hardy trees, shrubs, perennials and lilies. 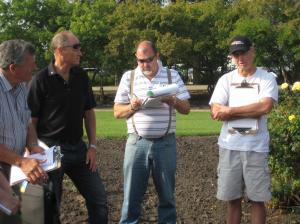 
End of an era AAFC's
unwillingness to fill the director's position upon Dr. Davidson's transfer to a new post within the ministry was correctly viewed as the proverbial beginning of the end of the federal government's commitment to landscape plant breeding in Canada. While it is almost certain that this change in priorities was many years in the making, the decision was nonetheless disappointing to the overall industry. Who could have predicted that the process to facilitate an orderly closure of the Morden program would, in a very short time, result in a happy outcome for the sector?

Much to its credit, AAFC's mandate to terminate the plant breeding program did not include the option of simply walking away. As well as recognizing the value that had accrued in woody genetics, and especially the significance of the signature rose breeding program, there was also a keen interest to determine whether industry could play a role. Beginning in the spring of 2008, Dr. Campbell Davidson undertook to consult with various industry associations, including the Canadian Nursery Landscape Association and COPF (Canadian Ornamental Plant Foundation). These consultations resulted in a visit by several CNLA members to the Morden Research Station in the early fall of 2008 to review the remaining woody genetics and especially the rose breeding program.

As an important side note, a separate arrangement was made between AAFC and an independent consortium of nursery growers in 2003, for ongoing financial support of the hardy rose breeding program. In what eventually came to be known as the Canadian Artists' Rose Consortium, approximately 15 nurseries invested funds under two separate agreements with AAFC to develop a further six varieties of hardy roses, each one to bear (naturally) the name of a famous Canadian artist. Two roses, Emily Carr and Felix LeClerc, have been introduced through this program. AAFC has continued its commitment to this consortium, and further Artists' roses will be introduced in coming years.
Industry steps in
The first important step in the process of taking over the breeding program involved submission of a response to AAFC's Request for Proposal, first issued in the summer of 2009. CNLA's response was aggressive, suggesting the AAFC provide industry access to its many woody genetics at no cost. Beyond the genetics, CNLA also sought to acquire the royalties that are currently paid by growers on all plants introduced over the years through AAFC's breeding programs, as a means of helping the association to fund further research. With some minor revisions, AAFC agreed to both of these requests, and signed agreements were in place by the early winter of 2010.

Notes CNLA research chair Michel Touchette, who has been the driving force behind this new initiative on behalf of the industry, "It is important for everyone to realize that it has never been the intention of the Association to become directly involved in plant breeding. Instead, we see this as a brand new model where research priorities are driven and directed by industry, but the work is done by partner organizations."

By chance, or through a happy alignment of the stars, these circumstances were all unfolding at more or less the same time as the Vineland Research and Innovation Centre was being established in Ontario's Niagara peninsula. From the outset, Vineland clearly recognized the ornamental horticulture sector as an important stakeholder. CEO Jim Brandle confirmed that the fit was natural, which led to Vineland's committing breeder time to the project. This agreement in principle between CNLA and Vineland formed an integral part of the original proposal to AAFC. 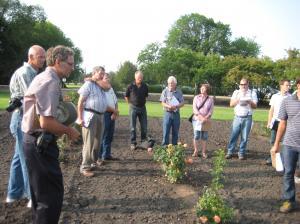 Rose growers from across the country met at Morden Station in August, 2010 to evaluate some of the roses coming out of the AAFC breeding program.

Success through partnerships
Although the proposal to AAFC clearly stated that it was not CNLA's intent to get into the business of plant breeding, it soon became clear that direct involvement would be required on an interim basis to adequately facilitate the transition of plants and genetics from AAFC to industry. With the double good fortune of being able to hire Manitoba-based researcher Rick Durand using royalty funds, the evaluation and transfer of rose plants and other genetics were well underway by early 2010. Throughout, the local industry was fully engaged in the process, with nurseries such as Aubin, Morden and Jeffries receiving and growing on hundreds of rose seedlings for further evaluation and maintenance, until a permanent home can be found.

The bulk of the transfer process is now completed, but there will be an ongoing need for Rick Durand and nursery growers to remain at least somewhat involved, as roses will be tested and evaluated at sites across Canada for both cold hardiness and disease resistance.

What was first seen as a real setback to the industry can now be looked upon as a huge opportunity. Besides gaining access to some valuable woody genetics for consideration in future breeding programs, the industry was also able to take over an active, well-maintained and highly-respected rose breeding program. In addition, access to royalties, now managed by CNLA through the newly formed Heritage Fund, gives the association and its members a solid foundation to pursue ongoing new plant research into the future. This is certainly the beginning of a new era for the Canadian nursery and landscape sector, and we can only look forward to what the future has in store. 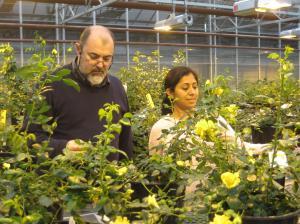 The willingness of AAFC to work co-operatively with the Canadian Nursery Landscape Association in the transfer of its breeding program to industry was certainly good news to an industry concerned about the future of landscape plant breeding in Canada. However, it's no secret that plant breeding is a long-term and expensive undertaking, requiring both specialized expertise and facilities. The co-operative arrangement between CNLA and Vineland Research and Innovation Centre was therefore a logical one that would allow for industry direction, but without actual day-to-day involvement in breeding research.

Vineland reaffirmed its commitment to the ornamental horticulture sector (including both floriculture and woody ornamentals) by hiring Dr. Rumen Conev as research scientist and Dr. Parminderjit Kaur as senior research technician. Dr. Conev brings a wealth of plant breeding experience to Vineland, including post-doctoral and senior scientist-level work in Europe, Japan, Israel, Canada and the U.S. His last position before joining Vineland was as an assistant professor of Ornamental Plant Breeding at Virginia Tech. Dr. Kaur joined Vineland in 2010 after completing her doctorate study from the University of Rhode Island. She had been a senior research fellow at Punjab Agricultural University, India, in a national-level tomato hybridization project.

Even before the ink was dry on the Memorandum of Understanding between Vineland and CNLA, Dr. Conev became actively engaged in the rose breeding program through several trips to Morden, to familiarize himself with the rose selections and AAFC's evaluation criteria and documentation procedures. Since then, Vineland has received 86 plants, representing 57 genotypes, from the Morden and St. Jean programs. These roses have been further propagated to ensure a minimum of three of each, for further breeding purposes.

As directed by industry, the breeding program will focus on disease resistance, followed by cold hardiness, as the two main objectives. "Of course we need to consider attributes such as flower colour and form," notes Michel Touchette, chair of CNLA's New Plant Subcommittee, "but we believe that disease resistance is the one characteristic that will rekindle consumers' confidence in roses."

The research work at Vineland has also included a multi-factorial replicated seed germination experiment, to test several physical, chemical and biochemical agents to induce more even, faster germination at higher rates. "There is a lot of published data available to us," says Dr. Conev, "but it is not particularly applicable to cold hardy varieties and so it is necessary to obtain our own findings and data to ensure a better rate of success for our CNLA breeding program." Rita Weerdenburg, former publisher of Landscape Trades, is CNLA's grower sector manager.
Share
Tweet
Mail