Significant changes you need to know

Hardiness zones are intended to help define the potential suitability of perennial plant species to different regions of the country. Canada’s plant hardiness zones have recently been updated using climate data covering the period from 1981-2010. The changes are significant, with zone designations changing in most communities across the country. Here we provide a quick refresher on the history of hardiness zones in Canada, and some insights on their use and what the future may bring.

Canada’s plant hardiness zones map was originally developed by Agriculture Canada in the 1960s. Researchers examined survival data for 174 woody plant and shrub species and cultivars at 108 test stations across the country. A hardiness index was generated at each test location according to performance and survival rates of the various species under study. The hardiness index was ultimately modeled as a function of  seven climate variables that influence plant survival and growth: Mean minimum temperature of the coldest month, frost-free period in days, rainfall June through November, mean maximum temperature of the warmest month, rainfall in January, mean maximum snow depth, and maximum wind gust in 30 years. The original zone map was produced by calculating the hardiness index at 640 climate stations using 1930-60 climate data and then hand-interpolating these values onto separate maps of eastern and western Canada (Ouellet and Sherk, 1967c). Raw hardiness values (which ranged from 0 to 92) were classified into 10, 10-unit zones (labelled 0 to 9), and each zone was further divided into two, 5-unit subzones (indicated by the letters a and b). It is these zones that are commonly known to gardeners and other users. 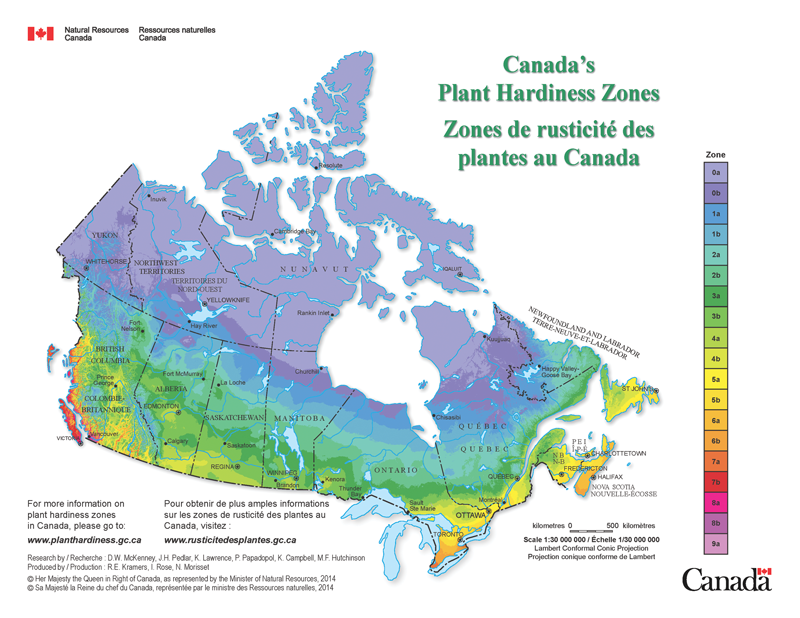 Canada’s plant hardiness zone map has been updated using climate data from 1981-2010 resulting in significant changes with zone designations altered in many communities. Additionally, the new map includes two new zones (8b and 9a).

The United States Department of Agriculture (USDA) also has a hardiness zone map that is used to guide planting decisions in Canada (planthardiness.ars.usda.gov/PHZMWeb/).  It is based solely on annual extreme minimum temperature — the average coldest day of the year — so it does not include the effects of factors like snow cover. This model was recently updated by the USDA but the update did not include Canada. This updated map has eleven 5.6oC zones (1-11) within the continental United States which are further subdivided into 2.8oC half zones (e.g., 1a, 1b, 2a, etc).

Both the Canadian and USDA plant hardiness maps have now been updated for the Canadian land base using recent (1981 – 2010) climate data (see Figures 1 and 2).  High-resolution versions of these maps are available at planthardiness.gc.ca, including fine-scaled insets for several regions of the country. The old and new hardiness zones for many communities can be queried at the web site.  Note that the Canadian and USDA zones do not overlap in a simple fashion, for example a zone 4a using the Canadian approach does not mean it is a USDA zone 5a. This should be expected given the very different approaches used to generate the two products.

Adjusting expectations and calibrations
Climate changes in the 1981-2010 period have resulted in significant changes in plant hardiness zones. Both the Canadian and USDA approach show increases of 1 to 3 hardiness zone designations across western Canada; relatively small increases of up to 1 zone across eastern Canada (with some areas even showing slight declines); and the appearance of new zones (8b and 9a) on Vancouver Island that had not previously been found in Canada.

There are several important points to keep in mind when interpreting and using plant hardiness zone maps. These include: More modern methods of plant hardiness zones are being developed; something called climate envelopes (more on this below). These tools provide opportunities to develop more rigorous, species-specific zones that can be updated quickly and can involve citizen science, thus making use of results across a much wider range of climate gradients.

Climate envelopes; zones of the future?
An emerging alternative tool is the use of individual species distribution models, also known as climate envelope models. For this approach, all that is needed are the longitude and latitude coordinates where the species is known to occur in an enduring manner. Experience suggests that as few as 30 reasonably well distributed observations can produce robust maps indicating where the species can perform well.

In support of this approach, plant distribution data from across North America is being gathered through ongoing citizen science and data sharing agreements with government and non-government organizations. These data, which currently consist of approximately three million plant occurrence observations, have been used to generate maps for nearly 3,000 North American plant species (see http://planthardiness.gc.ca/). These include models that are based on both temperature and precipitation variables as would be experienced in natural settings, as well as temperature-only models which are aimed at situations where water can be added by the grower/gardener. This work is ongoing and maps are updated as new data become available. More details are provided in the references below.

Final comments
Although hardiness maps remain useful, they do have important limitations that need to be recognized. The maps apply a single formula for the entire country, ignoring possible interactions in climatic variables that may vary across the country. For example, as the climate evolves, warmer temperatures may be useful for plant survival in western coastal areas but could decrease snow cover in other parts of the country exposing plants to lethal minimum temperatures and damaging winter rains. Furthermore, the hardiness zone designation for a particular plant is often not based on extensive testing in the field, which limits the overall effectiveness of the system. In addition, given that climate is changing, the testing and assignment of plants to zones is a moving target. Growers may think they are testing a plant or new cultivar in a particular zone, but that zone – like the climate – is evolving.

Plant species respond to climate in individualistic ways. Species-specific distribution models are increasingly practical and offer a flexible and rapid approach to mapping potential distributions. Through data gathered as part of our plant hardiness project, we have developed climate envelope models for nearly 3,000 species to date that cover both the U.S. and Canada. This work is ongoing as time and resources allow. A much larger set of individual species maps could be developed with fairly minimal coordination between nursery growers and citizens.  Collaborations are invited, check out planthardiness.gc.ca.