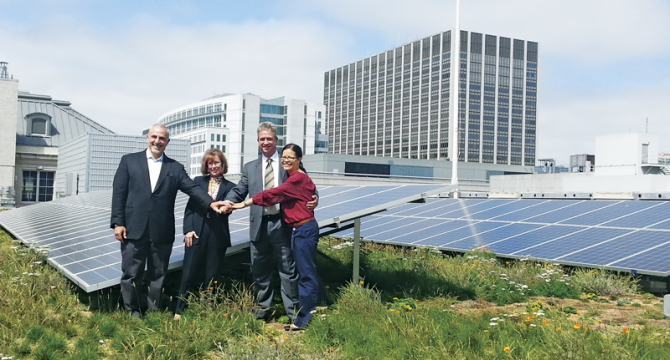 Green infrastructure solves many urban problems; solutions and benefits offered by plants open up opportunities for the green trades

Green infrastructure technologies are becoming recognized by engineers, designers, health care advocates, developers and policy makers as proven and effective ways to solve many urban problems. Yet in North America, the many contributions of green infrastructure to our natural and built environments, as well as to human health, are not fully reflected in public policy. The green industry must put priority in raising awareness of the important health and financial benefits of green infrastructure.

Water, water everywhere...
When we engage in traditional urban development we change the hydrology of the landscape. Impervious surfaces do not allow water to infiltrate soils or evaporate through vegetation. In a natural setting, vegetation captures and infiltrates storm water with little as 10 per cent runoff on the surface.

With increasing amounts of green infrastructure in urban areas, storm water is captured, stored and then slowly released, protecting water quality and reducing the strain on aging pipes, erosion controls, storage and treatment and other forms of water-related infrastructure. When widely implemented, green infrastructure can reduce the size and cost, or even eliminate, single-purpose grey infrastructure, such as storage tanks, ponds and tunnels.

The current trend toward more intense periods of rainfall in many parts of the world has also placed additional stress on the capacity of our storm and sanitary sewer systems to deal with added volumes. These storms and the resulting flooding contribute directly to multi-billion record insurance claims across North America.

Green infrastructure can often be designed to maximize its ability to capture rainfall, thus mitigating some of the severity of flooding after a major storm event and reducing the occurrence of combined sewer overflow events, especially during periods of less intense rainfall. Plants and soils capture and retain storm water, and micro-organisms are able to filter and metabolize a wide range of pollutants.

Fire on the horizon
In addition to addressing storm water challenges, green infrastructure also helps cool our increasingly overheated urban regions. When the sun strikes the millions of square feet of dark roofs and miles of pavement that characterize cities, these surfaces transfer and reflect this heat to the atmosphere around it  a phenomenon called the urban heat island effect (UHI).

By using the sun’s energy to turn water stored in plants (through transpiration) and soils (through evaporation) into water vapour rather than heat, green infrastructure transfers this energy away from surfaces and even cools the surrounding air.

An UHI modeling study by Environment Canada on the Annex neighborhood in downtown Toronto, Ont., demonstrated that when 25 per cent of the area covered in trees was removed, the summer temperatures jumped by a remarkable 2°C.

Providing children with nearby opportunities for natural playgrounds and unstructured play is an important strategy for combating the rise in sedentary lifestyles. Too many children are more inactive now than ever and the future costs of this will be staggering. Accessible green roofs and walls provide new gardening and recreational opportunities on underutilized surfaces in our cities. Parks with trails through natural areas provide important recreational infrastructure.

Studies show that contact with nature can reduce stress, a major contributing factor for depression, impaired immune systems and infections. A recent study conducted by Ian Alcock, of the University of Exeter in the U.K., tracked 1,000 participants for over five years. In the study, people who moved to densely-built or grey areas suffered a decline in mental health.

Having a job contributes considerably to supporting our health and well-being. Green infrastructure projects tend to be more labour-intensive than traditional forms of infrastructure. So for each dollar invested, more employment is generated. Research in one of Canada’s major cities indicates that for every $170,000 to $520,000 invested in green roofs, a year of employment is created for one person based on the direct labour related to design and installation. Indirect jobs associated with green infrastructure components include growing plants, manufacturing roof systems and blending growing media.

Benefits beyond aesthetics
The American biologist Edward O. Wilson developed the Biophilia Hypothesis, which argues that humans share an innate attraction to nature, and connecting with nature directly affects our mental and physical well-being. Bill Browning, a veteran green building designer, researcher and analyst, has studied the many benefits that result from integrating nature into the building design process. Among these are reduced illness and absenteeism, better employee retention, faster healing rates for hospital patients, better classroom learning rates, improved retail sales from greener streets and natural lighting and reduced levels of crime and violence.

Next steps
Communities need to understand that green infrastructure can deliver preventive health care benefits that reduce expenditures, lengthen lives and improve quality of life. More research is needed to understand the full extent of these benefits, and help practitioners and policy makers better quantify them.

If the public had a real choice in the matter, do you think they would invest in a new power or water treatment plant in a remote location, or in green infrastructure spread throughout their own community? Steven Peck is president of Green Roofs for Healthy Cities.
Share
Tweet
Mail