Many in the green industry were born into the business; Nathan Helder was not. As a result, his seven-year history with Gelderman Landscape Services, based in Waterdown, Ont., has required a steep learning curve. Helder tackled the challenge of taking over the business by doubling down on finance, an area he sees as the weak spot in many landscape companies. His attitude was to ask questions about every aspect of Gelderman’s finances, and to take advantage of all the mentorship opportunities he could find.

By being inquisitive, Helder has learned to identify some specifics in financial statements that can help guide companies toward enhanced profits. To illustrate, he crafted a sample Profit and Loss (P&L) statement for a strong company, as well as one for a company needing improvement. Then he agreed to be interviewed about what the numbers mean, as well as the questions and opportunities they suggest. Both fictional companies are design/build/snow contractors, with identical revenues.

Company B has a strong bottom line, but Company A’s numbers show some weaknesses. Helder spent an afternoon explaining why.

He first highlighted the direct costs area (Cost of Goods Sold, including direct labour, subcontractors and materials), used to determine gross margin. Company B is spending less on direct field labour, and more on specialized subcontractors. “I plugged in the numbers this way to suggest that using skilled subcontractors could result in lower direct labour and material costs. Sometimes we think we need to keep people busy, yet utilizing subcontractors with higher markups can produce higher profits. Higher spending on materials could also indicate poor purchasing processes and tracking or inaccurate estimates and takeoffs,” Helder says. He identified improved material controls (implementing a purchase order system, for example) and takeoff accuracy as productive ways to lower costs.

LOOKING AT EQUIPMENT
Equipment costs can be a financial drain on landscape companies — so significant, that Helder broke equipment out on the spreadsheet. “Company A has a full-time mechanic on staff, owns all its equipment, and most of the equipment is at least seven years old. It has to pay for a skilled employee’s salary to maintain, plus parts and shop supplies. Company B takes its equipment to a shop for repairs, leases most of its equipment and rotates equipment after five years. As a results it uses less fuel and has fewer breakdowns — less downtime,” Helder says. In his illustration, Company A is spending nearly $80k more on equipment, to service identical revenue — a huge drain on profitability.

Depreciation and leasing costs are higher for Company B. This indicates that equipment overall is newer, and less likely to break down, with the resulting repair bills and wasted labour expense. While lower depreciation means lower expense on a P&L, it means a fleet is getting older and prone to more expensive repair. Helder says, “One of my own biggest mistakes was buying out the leases on three trucks. What we saved in monthly expense was wiped out by frame and transmission trouble, frustration and downtime. I look at the experience as a $60,000 mistake I will never make again.”

There is no doubt Helder is convinced that equipment should serve only one function in a landscape company: to do a job. He says it’s easy to put emotions into equipment, but falling in love with a truck or skid steer can be very expensive. 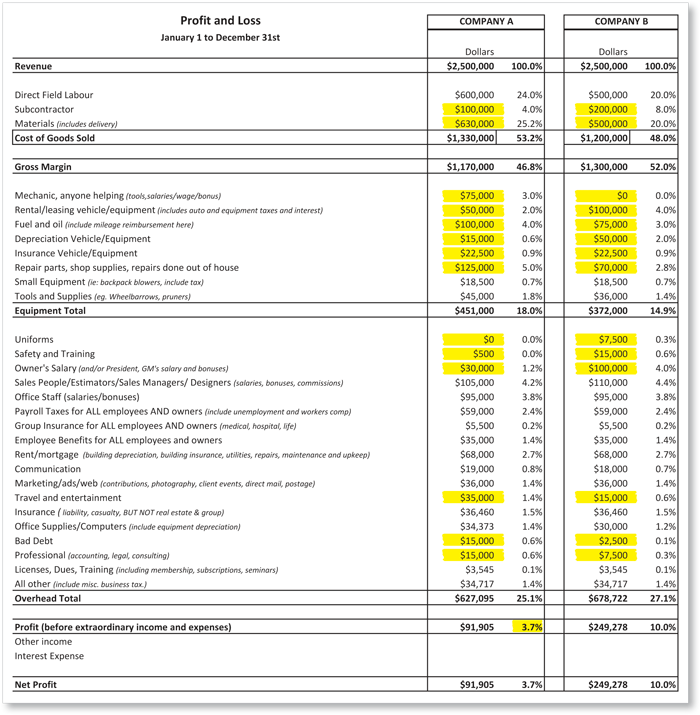 DRILL DOWN TO OVERHEADS
Under overheads, Helder pointed out two relatively small line items he says can be very revealing about a company’s success. Company B spends more on uniforms, and a lot more on safety and training. According to Helder, investing in training indicates a company is investing in its employees; that it considers employees a valued asset. He asserts that investing in training pays off over the long term with lower turnover, better efficiency and improved quality. Uniforms are an investment in success, he says, because they convey professionalism and marketing value.

Helder stressed the critical importance of placing the owner on salary; he sees this expense item as one of the top indicators of a company’s financial success. Company B pays its owner an appropriate owner’s salary, while Company A does not. While this practice is common, Helder believes it leaves companies with a distorted financial picture, and vulnerable. He says, “What happens if there is no profit? What happens if you ‘get hit by a bus,’ and must replace yourself with a general manager?”  Overheads are slightly lower for Company A, but Helder says they are artificially lower, since the owner is not paying himself a salary. “If he thinks his overheads are low, he is fooling himself.”

Travel and entertainment spending is higher in Company A, suggesting this fictional owner might be running more trip and dining expense through his company to minimize taxes. Helder, like Company B, is very careful about expenses like this, as well as personal vehicle use: “Canada Revenue Agency is performing more audits than ever.” Helder believes paying up the first time around is far cheaper than being audited.

Bad debt also shows higher for Company A, which Helder says should suggest a question: Is the company’s accounting being managed currently and efficiently? At Gelderman, “We have a payment policy in place: 30 per cent due on signing; 30 per cent at start of work; 30 per cent due midway, typically after hardscape installation; and 10 per cent upon completion.” This payment policy can protect a contractor from large holdbacks — or worse — while correcting small details at the end of jobs.

Why are professional fees higher at Company A? Helder says this could indicate a finance-averse owner, who procrastinates on accounting and promises himself to catch up during a rainy day. In this scenario, Helder says organization and efficiency suffer, accounting costs are higher, and the owner could be leaving money on the table.

Nathan Helder participates in a business peer group. Members runs businesses of similar sizes in non-competing geographic areas, and meet to compare and discuss financial details in-depth. Over and over, he says even the owners of large companies say, “I need to learn my numbers better.” So Helder knows first-hand that landscape companies with this challenge need not feel alone.

THE BOTTOM LINE
Net profit, even with artificially low overhead cost, is only 3.7 per cent for Company A. Company B’s profit performance was well over twice as good — all on the same revenue.  “Every company needs to make profit. Profits are needed for capital expenditures, return on assets, return on owner’s equity/investment, cash flow, additional growth and investment in people.”

Going over the statements revealed Helder’s huge respect for his fellow landscape contractors. He clearly hopes his curiosity about numbers might help others, just as mentors in the industry have helped him.

In Helder’s mind, it’s all about goals. “No matter what your goals are — whether you want to expand your company or stay at the same size — you still have to manage numbers.”