Appalling Spalling, an article I wrote in the January 2013 issue of Landscape Trades, addressed the issue of spalling brick veneers on homes caused by improperly installed raised patios, garden walls, and paver overlays on concrete steps and porches. The article certainly drew some attention. I personally got several emails and calls from homeowners who read the article online, had been affected by the issue in one form or other, and were looking for answers.

Calls and emails came from near and far. It certainly cemented in my mind the pervasiveness of the problem — it truly is widespread, and affects many homeowners. Before I get into how the industry is dealing with the matter, and for those of you who missed the original article, perhaps a quick review is in order.

Recap of the problem
Who knows where it got started, but overlaying concrete porches and steps with pavers has been a growing trend over the last half-dozen years or so. It became so popular, in fact, that suppliers responded by manufacturing thinner pavers designed specifically for overlays. These thinner, lighter pavers were easier to work with and could even accommodate homes where the door soleplate or sill was too close to the concrete porch or step for an overlay with traditional pavers. Before long these overlay pavers were featured in supplier catalogues, and contractors everywhere were picking up on the trend. More and more homeowners were offered a perfect solution to the drab, industrial-looking concrete steps and porches that all too often mar the front of beautiful homes. 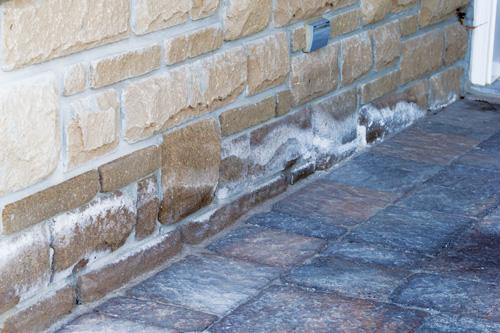 During the winter, moisture trapped in brick veneers will expand and contract with freeze and
thaw cycles. This trapped moisture will eventually weaken the brick and cause the faces to
break off - or spall.
Unfortunately, the problem with overlays is, contractors are using the system on homes that really weren’t designed to accept paver overlays. Many homes are built where the bottom row of brick veneers start at grade with the poured concrete step or porch. When contractors overlay these porches and steps, they are actually covering the bottom row of bricks, and weep holes, on the house.

Not only is covering weep holes on brick veneers contravening building code, it actually traps moisture at the base and behind the brick-veneered wall when it rains. Trapped moisture wicks up the brick wall, sometimes several feet high, and on hot summer days when the sun beats down and dries the brick, efflorescence is left behind. Although efflorescence in and of itself can be benign, and is often present in newly-manufactured concrete products, constantly reoccurring efflorescence from trapped moisture is often a sign of something more serious — something that could eventually affect the structural integrity of a home.

The efflorescence caused by all these overlays really is what drew attention to the issue for me. I could drive down any new neighborhood where a lot of landscaping work was done and see many affected homes. The overlays also brought to light a few other secondary, but just as serious, side issues. I saw many homes where raised garden beds were installed at, or even above, the brick veneer line. Other homes have had raised steps and raised patios built up directly against homes with little or no protection — usually a thin weatherproof adhesive membrane.

Although efflorescence from trapped moisture in brick accentuates the problem, the fact is that the practice of building against most other forms of cladding on homes, when done incorrectly, can and will cause damage and also violate building codes. These practices most likely violate the National Building Code but at the very least clearly violate the following Ontario Building Codes:

9.15.4.3 Extension Above Ground Level
(1) Exterior foundation walls shall extend not less than 150 mm (5 7/8”) above finished ground level.
9.27.2.2 Clearance from ground
(1) Not less than 200 mm (7 7/8”) clearance shall be provided between the finished ground level and siding that is adversely affected by moisture such as wood, plywood, OSB, waferboard and hardboard

Aside from the building code requirements for grade clearances, code for installing brick veneer calls for weep holes to be placed no more than 24-in. on centre when open head joints are used, and no more than 16-in. on centre when wick materials or round tubes are used. These weep holes are there to allow for unobstructed air to circulate and dry the wall, but also to allow water to drain from behind the wall. It stands to reason that any project that obstructs these weep holes in any way, shape or form are contravening the codes that govern them.

A thorough understanding of construction specifications for installing concrete products against homes is crucial before taking on any project. Covered weep holes, specifically, seem to have drawn the attention of many home inspectors. I’ve had a number of homeowners contact me, including a personal friend of mine, where the buyer’s home inspector called for remediation of building code violations of covered weep holes as a condition of sale.

Confusion on the issue of building steps and raised patios against homes have been around as long as I can remember. Contractors are not the only ones that have been starving for answers and clarity. I’ve had highly respected and qualified members of the design sector ask me how we dealt with building against homes. The topic also comes up at designer meetings and informally at industry gatherings. With the Advanced Residential Technician course we’re finally given a solution to at least deal effectively with raised patios and steps — the relief wall.

There seems to be no simple solution to concrete overlays. Although the construction committee task group recommends breaking up the concrete and pouring a new concrete form at the proper height, that solution simply isn’t practical in most situations. Unless someone comes up with an overlay system that doesn’t contravene building code, homeowners simply won’t have the option of covering their concrete porches and steps with concrete paver products.

Summary
Designers and contractors in the field are often looking to the industry for guidance and support. Front line field workers are often the first to realize when a product is causing issues or installation guidelines need clarity. They need to share their concerns. In order for organizations such as the ICPI to be effective at creating solutions, they need information to flow up from the front lines.

Although organizations such as ICPI encourage direct communication from front line workers, most contractors and designers will look to producers for help and advice on both product and product uses — including installation best practices. Producers are close to contractors and designers and also respond directly to customer complaints. They respond to product quality issues, but often see examples of improper uses of their products. They can see if an issue is isolated or part of a greater trend. They should, in my view, take a greater role in bridging the current communication gap between designers, contractors and homeowners and the organizations developing best practices. Installation guidelines are developed by ICPI and other supporting organizations, but producers are exposed to day-to-day issues and should be one of the key vehicles for communicating that information.

I can’t help but wonder, for example, if problems with overlays could have been dealt with sooner. If a protocol was in place to push the information from the front line to the organizations that can make a difference, the solution could have been communicated to contractors much earlier. A quicker response to this issue could have made a difference last season. Especially if information would have been shared at the spring contractor showcase events. Certainly the hundreds of homeowners who have been affected last season by improperly installed projects would agree.